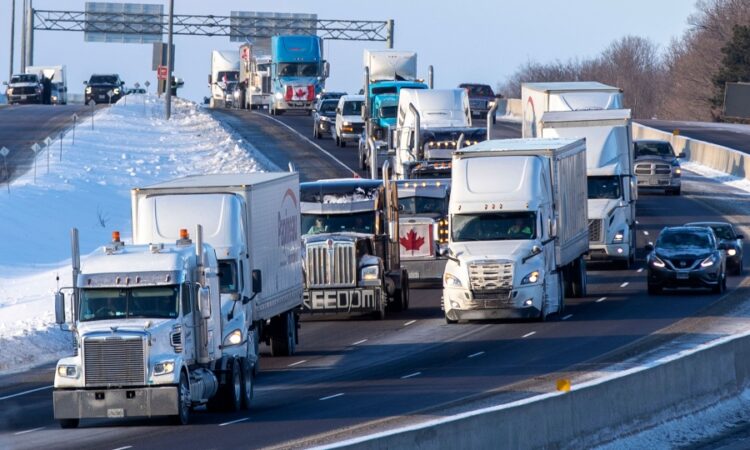 On Sunday, 23 January 2022, a convoy of Canadian truckers set out from British Columbia and embarked on a week-long trek from Vancouver to Ottawa to protest the federal government’s vaccine mandate. This policy came into effect on 15 January 2022 and prescribed that all cross-border truckers must show proof of vaccination to transport goods between the United States and Canada.

The participating truckers dubbed themselves the ”Freedom Convoy”. Reports stated that the convoy’s size varied along the way before reaching Parliament Hill in Ottawa on Saturday, 29 January 2022. Once arrived, thousands engaged in a lively and raucous protest on a number of anti-government grievances, which included the truckers’ vaccination mandate.

The New York Times reported allegations that some participants called for an attack on Parliament mirroring the 6 January 2021 US Capitol attack. The organizers, however, condemned such calls for violence, and the protest was relatively peaceful.

The Canadian Trucking Alliance (CTA) maintained that, although the convoy was 70km long, approximately 10% of Canadian truckers are not vaccinated. This alliance further indicated that the government’s vaccination mandate would affect around 12,000 truckers. This effectively means they won’t be able to transport cargo across Canadian borders. Canadian truckers were previously exempt from the vaccine as they were considered an essential link in the supply chain.

There were whispers that as many as 50,000 trucks would form part of this convoy. However, the Kingston Police in Ottawa indicated that by midday on 29 January 2022, there were only about 121 trucks. This count excluded the 421 passenger vehicles and six recreational vehicles (RVs) that joined the convoy.

Despite making news headlines, Canadian Prime Minister Justin Trudeau felt the protest only represented a “small fringe minority” who did not wish to comply with the present climate and rules. The CTA, a federation of the provincial trucking associations, condemned the protest by stating it disapproves of traffic disruption on public roads and highways.

Why Canadian truckers object to receiving the vaccine

To vaccinate or not to vaccinate has been a hot topic for some time now. It is not just Canadian truckers who oppose this mandate. Around the world, people have expressed the belief that forcing a vaccine on someone violates a person’s rights as to what goes into their body.

Conspiracy theories about hidden truths regarding COVID-19 vaccines ignite and fuel the fires of anti-vaxxers. Many fervently believe myths such as DNA-altering side effects or microchip implants.

UNICEF found that conspiracies fanned vaccine hesitancy. Countries such as South Africa and Nigeria have the highest hesitancy and resistance percentages, while developed nations have pronounced lower rates. The United States has a hesitancy rate of approximately 33%.

Many naively believed Canada to be on par with the anti-vaccine percentage in the United States. Statistics, however, indicate that Canadians are much more receptive to receiving the vaccine, with only 18% remaining against this health drive.

This reflects the CTA’s view that only 10% of Canadian truckers are not vaccinated. Even if it’s only a handful, 12,000 unvaccinated truckers may still have an impact on the transport of goods between the United States and Canada if they are grounded. These drivers might favor a turn at the tables and take their chances with Lady Luck while out of operation. Industry experts expressed the first-hand experience of driver shortages and constraints on the supply chain due to vaccination mandates.

A ray of light amid several challenges

Operating truck drivers may well see a pay increase in the wake of those refusing to be vaccinated. The North American Transportation Club Alliance (NATCA) recently hosted a webinar on the vaccination mandates and the fair treatment of truck drivers who had their jabs.

One of Canada’s largest trucking outfits, Bison Transport, remarked that vaccinated drivers would most likely see a significant compensation hike. This trucking enterprise recently affected the biggest pay increases in the company’s history.

The webinar pinpointed several supply challenges facing the Canadian trucking industry. Apart from COVID-19, there was also marked flooding in British Columbia. The consequences of these floods were felt throughout the entire industry as freight movements typify this region. The record rainfalls and consequent mudslides caused significant supply chain problems. The vaccination mandate came in the wake of these natural disasters, effectively reducing transport capacity by 10% regarding cross-border road carriers.

Bison Transport tried to be proactive and started advocating vaccine importance months ago like other prominent trucking outfits. Despite these encouraging efforts, trucking companies still faced a small percentage of vaccine reluctance and resistance.

These refusals led to lucrative pay increases for vaccinated drivers. Bison indicated that its drivers received a 15% pay hike, while owner-operators fattened their wallets by 7% to 8% increases.

Truckstop Canada found that trucking companies are working with their customers to address supply chain issues. Bison indicated that it focuses on several main topics to seek resolutions:

Addressing these challenges also includes effective time management. Everyone has a role to play in this greater logistics chain to ensure that no time is wasted and lost. This efficiency must be applied by ports, loading docks and distribution centres. COVID-19 causes unnecessary dwell times, and employee absenteeism affects the entire logistics network.

The ‘Freedom Convoy’ protest unintendedly highlighted a lot of these issues. Each service provider in the supply chain has to navigate these challenges to stay on top of the problems.

Unfortunately, unvaccinated drivers pose a health risk. Existing and new strains of the virus can spread more rapidly through infected drivers. Thinking about the mandate and its practical implications is not pleasant, but Canadian trucking companies should fervently encourage vaccinations to lighten the strain on an already strained industry.