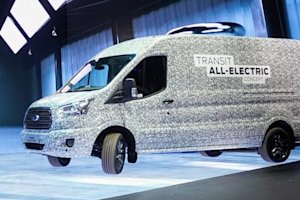 In  this age of Amazon, delivery to your door has become the biggest of businesses, and delivery by any means, from piece-workers’ personal vehicles to USPS postal trucks to, someday, pizza robots — but most especially, delivery by cargo vans.

Amazon has taken a stake in Rivian and has commissioned 100,000 electric vans from the startup. Mercedes began eSprinter production back in December. Hyundai and Kia have bought into UK electric van maker Arrival, and UPS has placed an order for 10,000 units from said same. Ford, whose cargo vans are the biggest sellers worldwide and have led that market in the U.S. for more than four decades, is now jumping in too, planning an all-electric Transit for the United States and Canada.

The electric Transit will be the third EV from Ford that’s on our horizon, after the Mustang Mach-E and the battery-powered F-150 pickup, the latter of which will likely also pull a lot of commercial duty.

Ford says its commercial truck and van sales have grown 33 percent since 2015 — it sold nearly a quarter-million vans last year. Offering an electric option will help customers meet any increasingly stringent future emissions regulations they might encounter from cities or states, reduce their own corporate carbon footprint, and even meet noise reduction regulations. And, the electric Transit will be more digital all-around, with connected capabilities to help operators better manage their fleets efficiently. It will also enjoy advantages all EVs share: easier to maintain and cheaper to operate.

The van will be “American-built,” Ford said in its announcement. It’s part of the automaker’s commitment to spend $11.5 billion on electrification through 2022.

And in a jab at the EV startups’ lack of infrastructure, Ford touts the backing of its vast network of dealers and its 730 North American commercial-vehicle centers. It also cites the Department of Energy in laying claim to “North America’s largest public charging network,” at least largest among vehicle OEMs.

Other than mention of the Ford Telematics and Ford Data Services fleet tracking capabilities, an onboard Wi-Fi hotspot, and a full suite of driver-assistance safety technologies, Ford didn’t offer much in the way of details about the van. It will be offered in a variety of configurations — cargo van, cutaway, chassis cab — and in three roof heights and three body lengths. But performance details, for now, are unknown.