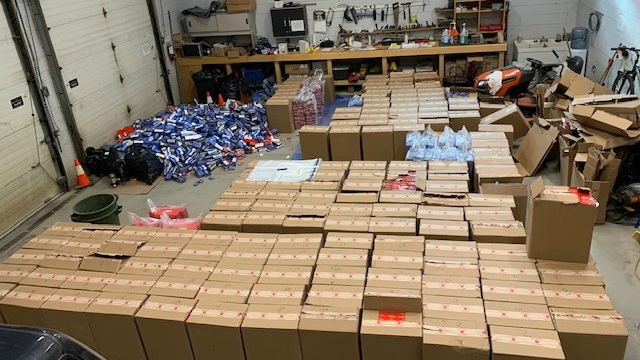 SUDBURY — Ontario Provincial Police discovered 160 boxes of illegal cigarettes near Blind River May 10 after the pickup towing a trailer full of smokes ended up in the ditch.

Two men and one woman, from Gimli, Man., face Tobacco Tax Act charges and the driver has been charged with careless driving.

East Algoma OPP received the call at 6:37 a.m. about a break and enter in progress into a trailer stuck in a westbound ditch on Highway 17 near Brownlee Road in the Municipality of Huron Shores, east of Sault Ste. Marie.

“Police arrived on scene a short time later and determined the incident wasn’t a break and enter, but in fact was a motor vehicle collision involving a pickup truck towing an enclosed trailer that was travelling westbound on Highway 17,” the OPP said in a news release. “Officers observed a large quantity of boxes containing cartons of cigarettes from the overturned trailer being loaded into a pickup truck that had worked its way out of the ditch.”

Police determined the cigarettes were illegal and seized 160 boxes of the contraband cigarettes. There were 50 cartons in each box and 58 bags of loose individual packages of cigarettes with an estimated overall value of over $195,000.

OPP also seized the pickup truck, several cellphones, a laptop and more than $5,000 in Canadian currency.

A 25-year-old woman and a 46-year-old man have been charged with possessing unmarked fine cut tobacco for sale and possession of unmarked cigarettes, both offences under Canada’s Tobacco Tax Act.

The 25-year-old male driver is also charged with careless driving, in addition to the contraband tobacco charges.

The three accused are scheduled to appear at the Ontario Court of Justice in Sault Ste. Marie on Aug. 5. Helping with the investigation were the Ministry of Finance, the OPP North East Region Canine Unit and the East Algoma OPP Crime Unit, the news release said.