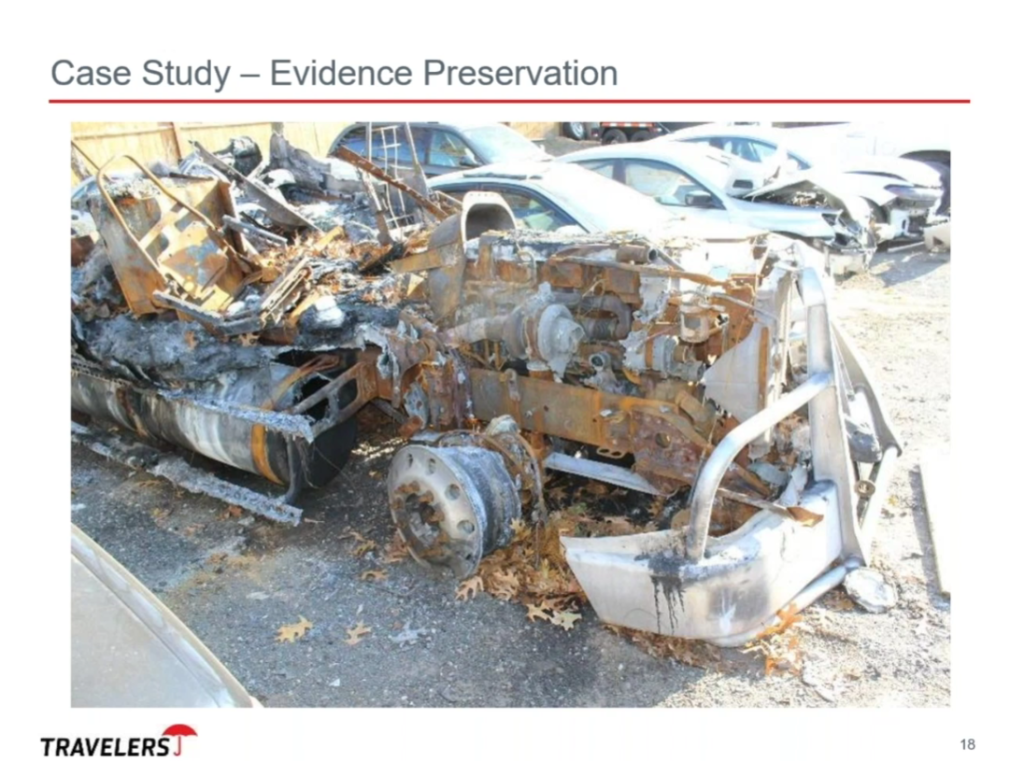 TORONTO, Ont. – The remnants of a truck fire may appear to most as nothing but a hunk of smouldering metal, but to Adam Holloway every fire is a mystery waiting to be solved.

The fire investigator for Traveler’s Investigative Services gave an overview on truck fire investigations at the virtual CargoNet Cargo Theft and Transportation Summit Nov. 11. The challenge with each fire, he explained, is to determine origin and cause.

“We can’t determine how a fire was caused if we can’t determine where it started,” he explained. To determine the fire’s origin, investigators look to eyewitness statements, fire pattern analysis, fire dynamics and arc mapping. Determining cause is more difficult, and includes analysis of the ignition source, type of fuel ignited, and the circumstances that brought the two together.

Complicating truck fire investigations is the fact the trucks are often moved once the fire has started. And depending on where the fire occurs, cargo and truck parts can be stolen before investigators arrive.

The most common sources of truck fires, according to Holloway, are poor preventive maintenance and pre-trip inspections. Improperly inflated tires, incorrect fluid levels and faulty repair work can all lead to truck fires. For example, a repair shop that doesn’t reinstall hangers or chafe protection could leave a truck susceptible to fire.

Investigators look to the vehicle’s ECM for tips on what happened, as the data pulled from the ECM can tell the story of what the truck was doing prior to the fire occurring. ELDs are generally easier to access after a fire than paper logs, for obvious reasons. Pictures taken by the driver can also be telling.

“What I find is a lot of drivers take pictures when a fire occurs,” Holloway said. “If we can grab those photos it helps us with the origin and cause determination. We can see where the fire is and where it progresses from there. Early photos help refine the origin better than fire patterns alone.”

Area surveillance camera footage can also be useful, if it can be obtained from neighboring businesses.

From there, investigators will often conduct an oil and fluid analysis, Holloway explained, pulling samples of fluids and sending them to a lab for analysis.

But every fire presents unique challenges. In some cases, it’s the preservation of evidence. Holloway recalled an investigation where the truck was towed to an expensive storage yard. Investigators had to secure and remove it for investigation, or face a hefty storage bill. The answer? Shrink wrap.

“The best thing to do in this circumstance was to shrink wrap the whole thing like a giant package,” he said. That involved lifting the shell nearly eight feet in the air and wrapping it before loading it onto a lowboy trailer for transport.

Theft is also a common concern, both of salvageable cargo and truck parts. Holloway spoke of a truck fire in Brooklyn, N.Y., where the truck was towed off the highway and parked alongside a secondary road in a rough part of town.

“When we got there, the truck was picked over,” he recalled. Boxes in the trailer were emptied, valve cover bolts were removed from the engine, and even exhaust clamps were taken. As he drove away from the site, Holloway looked in his mirror and noticed thieves were already back rummaging through the wreck.

Driving on a flat tire – even for what a driver may consider a “short distance” – can also cause a fire. In one case, Holloway’s investigation traced the fire to a wheel that had been dragged for about half a mile. The driver said he’d driven it just a short distance after suffering a flat.

“How short? It’s all relative,” said Holloway. In this case, a half mile was enough for the friction from the wheel dragging on pavement to ignite the rubber tire.

In other cases, faulty components can be to blame. Holloway investigated a fire that was tracked to a climate control system that had been recalled. The suspected system was removed from the truck, sent to a Traveler’s lab in Windsor, Conn., and any company that had been involved with that system was invited in to help with the investigation. It turned out there was some micro-arcing events occurring within the conductors that were to blame for the fire.