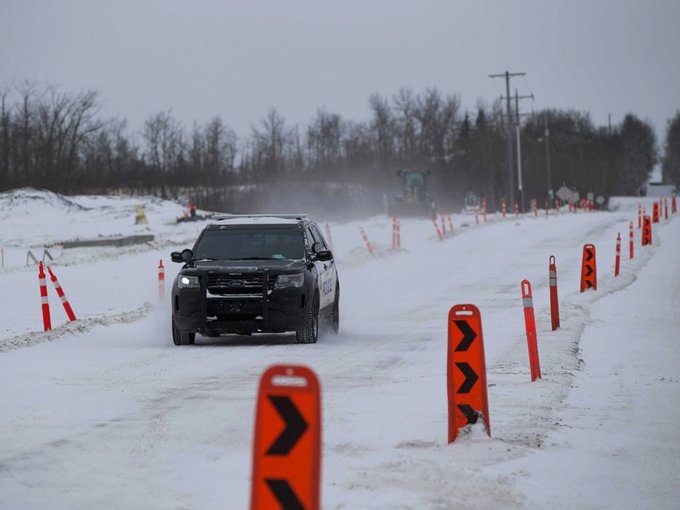 The suspect in a hit and run that injured an Edmonton police officer in southeast Edmonton Thursday morning is dead, police say.

The man shot himself in front of police officers who had tried to stop his vehicle and arrest him, police said in a news release. He died after being taken to hospital.

CBC News has learned the man was 19 years old.

The Alberta Serious Incident Response Team (ASIRT) said it has been directed to investigate. ASIRT investigates incidents involving police that result in serious injury or death.

Police were helping with the transport of an oversized load when a vehicle drove through the traffic control, striking an officer who was on foot.

The suspect vehicle then fled the scene, and police “made the decision to pursue based on the dangerous driving that had already been observed,” they said.

The vehicle came to a stop in the area of 17th Street south of Anthony Henday Drive.

The suspect got out of his vehicle and shot himself.

He was taken to hospital, where he died of the self-inflicted gunshot wound, police said.

A female who was also in the suspect vehicle was not injured.

The suspect vehicle was later determined to be stolen and had a stolen licence plate, police said.

The police officer who was struck was taken to hospital with minor injuries. No other officers were injured, police said.

Sgt. Michael Elliott, president of the Edmonton Police Association, said on Twitter that the injured officer will recover but “things could have been much worse.”

Elliott described the collision as an example of the “dangers in the street.”

As of 7 a.m., Whitemud Drive had been partially opened to eastbound traffic but police had shut down a section of 17th Street from Anthony Henday Drive to Ellerslie Road for the investigation.

The closure was expected to remain in effect for several hours.