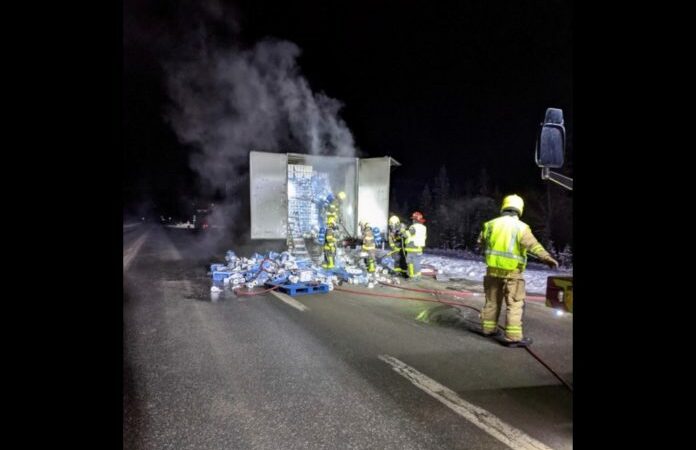 “Every toilet paper roll is sacred these days and we did our best to save what we could,” said the Fire Chief.

Firefighters worked to save a load of flaming toilet paper sparked by a semi truck’s mechanical issue on Sunday morning.

The incident occurred on December 27th at around 2:50 a.m. in Canmore, Alberta, Canada.

According to Cochrane Today News, the semi truck was traveling along the Trans-Canada highway near Canmore when the back end of the trailer began to smoke. The unnamed driver then pulled over and called emergency services.

When firefighters arrived, the driver was okay but the back end of the trailer had already gone up in flames, so crews worked to save the load of toilet paper as best they could.

“We responded to a report of a tractor trailer fire on the Trans-Canada eastbound, roughly in line with where Alpine Helicopters is located,” said Fire Chief Walter Gahler.

“Upon arrival, the back end of the tractor trailer was involved in fire and smoke. Our crews went in to knock it down right away. It seems to be a mechanical issue in the under carriage at the rear of the trailer,” he said.

In previous years, a load of toilet paper may have seemed unimportant, but Gahler says that, as 2020 draws to a close, the flaming toilet paper metaphor was not lost on the firefighting crew.

“We tried to save what we could, but between the fire and the water it was almost a complete loss,” he said. “I think even though it was heavy work, everyone was having a bit of a chuckle about what we were trying to save.”

“Every toilet paper roll is sacred these days and we did our best to save what we could.”