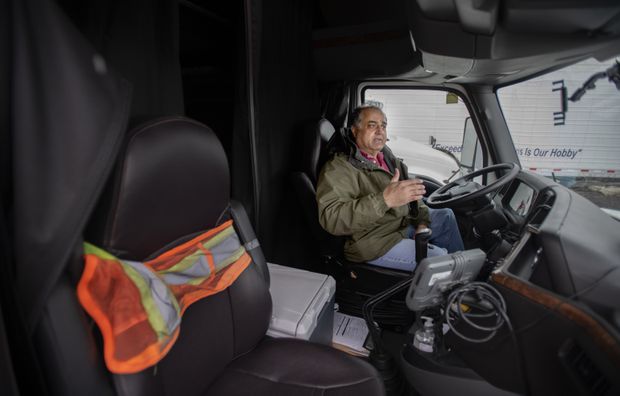 Zafar Saeed’s routine journeys to California can feel calm, meditative even, until he runs out of packed food and has to stop for a meal.

“I won’t feel comfortable going to the restaurants in a country where every day they have over 200,000 people getting infected,” he said.

His work as a long-haul truck driver – which involves hauling crates of fruits and vegetables to the Ontario Food Terminal in Toronto from California several times a month – was deemed essential at the start of the pandemic. The job puts him at heightened risk of COVID-19 when he travels to the United States and of infecting others when he returns home, since truckers who cross the border are exempt from the federal quarantine act (which requires 14 days of self-isolation for people entering Canada from another country).

“You love to come back home and see your family,” he said. “I was also scared that at least I should not be the reason to infect them with disease.”

Long-haul truckers such as Mr. Saeed of Mississauga are the invisible, often forgotten essential workers who have kept shelves stocked, Canadians fed and the economy running – at least somewhat – since COVID-19 hit early last year.

In 2019, Peel Region, which includes Mississauga and Brampton, was home to approximately 2,000 trucking companies and $1.8-billion of goods travelled daily through the region. The highways that pass through Peel just west of Toronto carry the highest truck volumes on the continent. But for drivers and their families, there’s a fear those same highways could bring the virus back into their homes.

Peel has tracked COVID-19 infectionsby sector in about 42 per cent of total cases. The two leading occupational groups of people who contracted the virus from mid-April to late November, 2020, listed were health care and trades, transport and equipment operators (a group that includes truck drivers), which both accounted for 7 per cent of cases. Though the work of a driver is mostly solitary, there have been 13 outbreaks in the transportation sector in Peel since March. (The leading sites of workplace outbreaks are manufacturing and industrial, where there have been 82 outbreaks.)

“You are exposed to everything. You go to the rest areas, you go to the truck stops, you go to the customers, pickups, drop … So now the problem is when I was coming back home, I didn’t know what to do,” said Mr. Saeed, who has worked as a truck driver since 2003, two years after he immigrated to Canada from Pakistan.

Because of the risk they take on, truck drivers should be included in the next group of essential workers to get priority access to the vaccine after health care employees and the most vulnerable have received their doses, the Canadian Trucking Alliance has argued.

In August, the federal government released safety guidelines to protect commercial drivers working during the pandemic, which included frequent hand-washing and observing physical distancing. It also suggested drivers self-isolate if they exhibited symptoms of COVID-19.

Because of the risk they take on, truck drivers should be included in the next group of essential workers to get priority access to the vaccine after health care employees and the most vulnerable have received their doses, the Canadian Trucking Alliance has argued.

In August, the federal government released safety guidelines to protect commercial drivers working during the pandemic, which included frequent hand-washing and observing physical distancing. It also suggested drivers self-isolate if they exhibited symptoms of COVID-19.

Drivers The Globe and Mail spoke to said the industry has adapted well on this side of the border – they’re able to pick up and drop off loads without exiting their vehicles, as paperwork has been digitized. But it can be a different story when they cross into the United States.

Driving to California has felt particularly perilous for Mr. Saeed – the state surpassed three million cases of COVID-19 this past week. And until two months ago, Mr. Saeed said he was often the only person wearing a mask when he went to truck stops and service stations in the U.S., despite soaring case counts.

During the first wave, he had an elaborate system in place for when he arrived home. He would change his clothes in the garage, be banished to his bedroom and eat off a separate set of dishes than his family.

But after a few months, Mr. Saeed and his family abandoned those measures and accepted the risks his job brought – but his fear remains. Two friends of his who are long-haul truckers have contracted COVID-19 in the past month.

Baldev Mutta, who leads the organization Punjabi Community Health Services in Mississauga, worries about the more contagious COVID-19 variants and the new risks they could pose to drivers. Without a pro-active system of surveillance testing in place, there isn’t much built into the system to ease the anxieties of drivers or their families.

“You think you don’t have COVID because there’s obviously no signs of symptoms. So you just come home, rest for three days, and now you’re back onto the road again,” he said. He’s spoken to two drivers who have contracted COVID-19 and infected their families. One quit driving to the U.S. and only does routes in the Toronto area, but giving up those long-haul jobs means his income has taken a $3,000 to $4,000 hit each month.

In the early weeks of the pandemic, when manufacturing ground to a halt, drivers were temporarily laid off. But then when business picked up and goods needed to be moved again from Canada to the U.S., Mr. Saeed returned to work – but many of his colleagues did not.

The trucking industry was already experiencing a driver shortage, says Stephen Laskowski, president of the Canadian Trucking Alliance, and COVID-19 accelerated it. The largest portion of truck drivers in Canada are 55 or older, and once the pandemic hit, some who were at retirement age exited the industry, he said.

Many of the drivers who retired were white, whereas a large portion of South Asian drivers in their 30s and 40s didn’t have that option, said Manan Gupta, the general manager of Newcom Media, which published a demographic analysis of the trucking industry in 2019. While 4 per cent of drivers were racialized in 1996, in 2016, the latest year for which census data is available, that portion had grown to 25 per cent – the majority South Asian.

This demographic is also the one that’s registered the highest portion of cases of COVID-19 in Peel Region, according to Peel Public Health. From mid-April to end of November last year, 59 per cent of COVID-19 cases in the region were among South Asians, even though they make up 32 per cent of the total population.

Ravish Garg, who arrived in Brampton from India in 2012, said the pace has been busy at the trucking company that employs him over the past 10 months. Every week, he’s on the road, driving to Utah or Texas, and only resting at home for 36 hours before hitting the road again.

He shares his apartment with his cousin, who works in a restaurant, but their shifts overlap in such a way that they’re only ever home at the same time for a few hours.

To minimize outings and interactions, Mr. Garg prepares most of his own food – microwaving leftovers or cooking scrambled eggs on the electric stove he has in his cab. When he refuels his truck, he pays through an app.

“We don’t go out. We only go out for the washroom or to take a shower,” he said.

Julius Ouko, a Kenyan immigrant in Airdrie, Alta., drives from his home to Peel Region each month to pick up a load, then drops it off in the northeastern U.S. before picking up another load there and heading back to Peel and then to Airdrie. A few times he’s transported toilet paper, that precious commodity, from the Procter & Gamble warehouse in Pennsylvania to a yard in Peel, where other drivers take it to distribute locally.

On top of the fear of getting sick, Mr. Ouko is also battling the crushing isolation of his job these days. Mr. Mutta, who leads the Punjabi Community Health Services in Mississauga, said his centre has received an unprecedented number of calls from men, including truck drivers, about their struggles with loneliness and depression during the pandemic.

Mr. Ouko said there was a small but meaningful comfort that came from simple interactions with shippers, receivers and other drivers before COVID-19: They’d talk about their social lives, about their families. Now, they try not to speak to each other at all.

“When you stopped and talked to other drivers, it used to feel like home, you know?” he said. “It’s much lonelier now.”