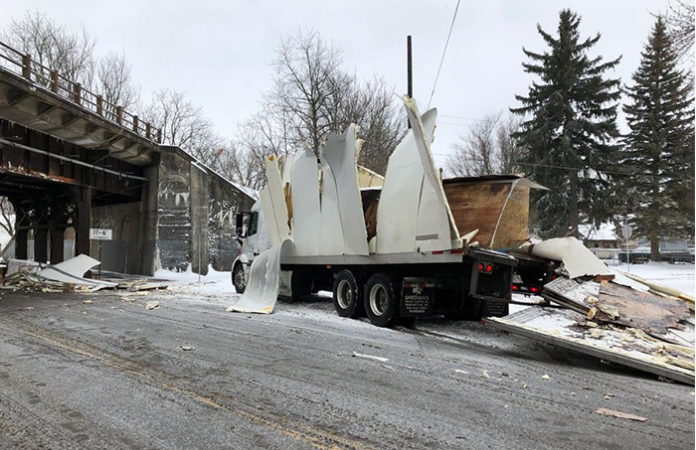 For at least the 64th time since 2000, a semi truck has smashed into the well-known Young Street CSX railroad bridge in the City of Tonawanda, New York.

This solid steel bridge is notorious in the trucking community, crushing semi-trucks since it was built in 1918.

The most recent crash took place in late January when a 55-year-old truck driver, Gary Dixon, hit the bridge.

Dixon’s incident marks the third collision with the bridge within six days. All three drivers were ticketed for driving on a route that isn’t designated for trucks.

Tonawanda has banned truck traffic on a section of Young Street leading to and from the bridge and signs were put into place to warn truck drivers of the dangerous bridge, however, the accidents continue, and are often blamed on faulty GPS directions.

Tonawanda Police Capt. Fred Foels said he believes the city has done everything it can do to prevent the crashes.

Foels has seen these crashes since the beginning of his career and keeps a thick binder full of details from each crash he has seen at the bridge.

“The Young Street bridge has been inspected after each incident to ensure it remains 100% structurally sound and safe for train movements,” Sheriee S. Bowman, a spokeswoman for CSX Transportation, said.

Despite all of the hits the bridge has taken over the last 102 years, it shows little damage.

“You look at it, it’s a battleship. It’s solid, it’s Bethlehem steel,” Foels said. “These things were built to last. Rail was king.”

Yet another semi truck has fallen victim to a railroad bridge in upstate New York.  A semi truck struck the 11 foot 6 inch railroad bridge on Young Street in Tonawanda, New York at around 6:45 p.m. on Tuesday, October 20th, making it somewhere around the 60th time the bridge has been struck since 2000, … Continue reading

The city has tried just about everything to slow the roll of crashes happening at the Young Street Bridge.

The signs leading up to the bridge warn drivers of its height of 11 feet, 6 inches, but CSX has denied the city permission to put warning signs on the bridge itself. Since many of the drivers using the bridge are from Canada, Foels has also requested signs to be posted with the bridge’s height in meters. However, the DOT denied this idea due to the potential confusion it could cause.

Foels has also mentioned that truck drivers use the street as a shortcut to avoid tolls, and slam into the bridge as a result.

The city has contemplated lowering Young Street or for CSX to raise the height of the bridge, eliminating the crash threat. This has proven to be an unrealistic plan due to the extensive costs and technical challenges that would result from the project.

“CSX is committed to working with the City of Tonawanda to help ensure the safety of our employees and the public,” Bowman said. “Raising the bridge would require a significant engineering project with impacts to numerous other bridges. Signage on the bridge would also restrict our ability to conduct visual inspections.”

A permanent solution has yet to be found.