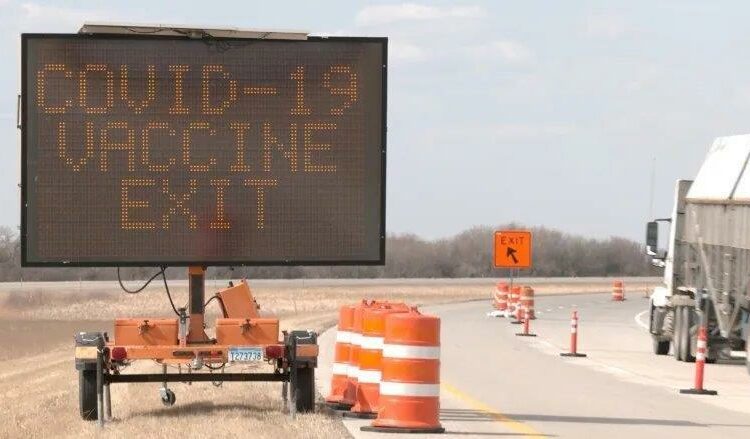 Dozens of Manitoba transport truck drivers received their first dose of COVID-19 on Wednesday at a site set up in North Dakota.

The North Dakota Department of Transportation’s rest area near Drayton, N.D., about 50 kilometres south of the international border, is the site of the first program of its kind between Canadian and U.S. jurisdictions.

“Everybody is in a ridiculously good mood and very happy and jovial,” said John Harrower. The driver based in Brandon, Man., got his shot at the drive-in site on Thursday afternoon.

“I have talked to a couple of the other drivers as well, and they are very relieved that they are having it done.”

The site is capable of handing up to 200 vaccinations per day.

“We had a lot of new interest generated just because it was the first day,” she said. “So we’re anticipating interest and attendance to increase.’

Harrower said the parking lot at the rest stop where vaccines are being delivered was full of transport trucks on Thursday afternoon. He estimated up to 15 trucks could fit into the lot.

“I feel relieved,” he told CBC News moments after he got his shot. “I feel great, like I didn’t even notice that she had put the needle in.”

Harrower heard about the program on the radio while driving in Saskatchewan earlier this week. The trucker then booked a load into the United States in order to take advantage of the program.

“Trying to schedule an appointment to get a vaccine at home is very difficult when you are never at home,” he said.

The site is open from noon to 8 p.m. local time on Wednesdays, Thursdays and Fridays for the next six weeks. Stinson said based on the initial response, more sites could open in the coming weeks.

“We’re looking at expanding those resources across the state and more in that location as well,” she said.

Saskatchewan Premier Scott Moe said during question period in Regina earlier this week that he’s in talks with state officials about vaccinating transport drivers from his province as well.

“We’re still in pretty early discussions with other partners to see who’s interested and who would like to have sites set up,” Stinson said. “We will be planning our sites in the same way as we did this one.”

Roughly 2,000 to 4,000 Manitoba drivers are expected to take part in the program.

The Pfizer-BioNTech and Moderna vaccines, which were bought by the U.S. government, will be provided free of charge to the drivers. The Johnson & Johnson vaccine is expected to be offered once U.S. officials reapprove the single-dose vaccine. The U.S. put a pause on using the vaccine to investigate reports of potentially dangerous blood clots.

The North Dakota Department of Health is also providing nurses and other staff to administer the first and second doses of the vaccine to provide full immunization of truckers, as well as a proof of immunization record, with the U.S. government expected to reimburse those costs.

Stinson said staff at the site have had nothing but positive interactions with Manitoba truckers who have stopped in so far.

“They are really excited about this collaboration, have really enjoyed kind of the interactions with our patients at this site,” she said. “It’s a joy to know that the service is appreciated.”

Harrower said he can get his second shot at the site any time after May 20.

He appreciates the opportunity, given many in his industry don’t work regular hours.

“Our schedule isn’t the same all the time. We’re not working nine to five, Monday to Friday,” he said.

He hopes others take advantages of vaccine clinics in Manitoba once it is their turn.

“Get it done when you have a chance, just so you can go visit grandma and you can go attend a funeral,” he said.