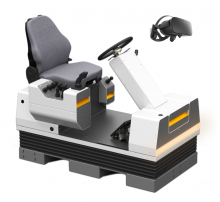 Edmonton-based Serious Labs has announced that it is developing a virtual reality (VR) commercial truck driving simulator with support from the Government of Alberta, Emissions Reduction Alberta (ERA), and the Alberta Motor Transport Association (AMTA). Alberta will contribute $1 million to development costs of the simulator, while ERA will contribute an additional $2 million. AMTA is providing data and expert guidance to ensure that the simulator meets transportation industry needs.

Serious Labs, the leader in VR simulation solutions for training and operation of heavy equipment, will design, manufacture, and pilot the simulator in Alberta. Commercial deployment is estimated to begin in 2024, with the simulator to be made available across Canada and the United States.

“Our new VR driving simulator will not only help to create an expedited route to proficiency and safety for drivers, but a better, cleaner environment overall by lowering greenhouse gas emissions from both training and day-to-day operation,” said Jim Colvin, CEO of Serious Labs. “This is a meaningful and important project for us, and we are excited by the journey ahead. Following our launch in Alberta, we look forward to making our simulators available across Canada, the United States, and beyond so that everyone can access these benefits.”

Mandatory Entry Level Training (MELT), the new training standard deployed throughout Canada for Class 1 and Class 2 commercial drivers, will become mandatory for all provinces by 2024. MELT is designed to increase the skill level and safety of commercial drivers by providing more training and practice. It requires that each new driver obtain over 100 hours of training time, including 76.5 hours of in-cab driving time, before being issued a license.

Canada’s transportation industry is facing a labor shortage of over 20,000 commercial drivers which is projected to worsen in the coming years. “While the new MELT requirements are excellent news for increasing safety standards, it means more time as well as greater costs for training centers, more emissions, and makes entering the industry more difficult for new drivers,” said Wade Carson, senior product director at Serious Labs. “Our goal is to help alleviate those difficulties and instill best practices for drivers by enabling them to complete part of their in-cab training in VR instead.”

The increased hours required for MELT training will also increase emissions. It is estimated that between 2023-2030, the Canadian trucking industry will contribute more than 5,650,000 tons of greenhouse gases while commercial drivers are being trained.

The new commercial truck simulator is projected to significantly reduce this number. For each driver trained using a blend of VR and in-vehicle training, Serious Labs estimates a reduction of 80% of greenhouse gas emissions compared to the traditional approach. As the simulator launches and becomes more widespread, Serious Labs projects it will displace 40% of emissions—more than 2,260,000 tonnes—produced in training between 2023-2030. By 2030, the simulator will be reducing 55% of MELT-driven emissions on an annual basis. By ingraining best practices, the simulator will also enable drivers to reduce emissions from day-to-day operations by 2.8%.

ERA was created in 2009 to help deliver on the province’s environmental and economic goals. ERA takes action on climate change and supports economic growth by investing in the piloting, demonstration, and deployment of clean technology solutions that reduce greenhouse gases, lower costs, attract investment, and create jobs in Alberta.

In addition to the environmental benefits, the simulator will also provide significant advantages for the transportation industry, said AMTA president Chris Nash. AMTA and its members have advanced the commercial transportation industry through safety programs, progressive policy, and partnerships since 1938.

“This VR simulator will change the face of driver training as we know it, and AMTA is behind the innovative technologies that will make our roads safer and our economies stronger,” said Nash. “The rapid application of new technology and disruption in industry is advancing quickly and we are proud to work alongside Serious Labs, ERA, and the Government of Alberta. The need for all industries to keep pace with new technology advancements will require collaborative use of data and digitization to develop integrated solutions for a safer tomorrow.”