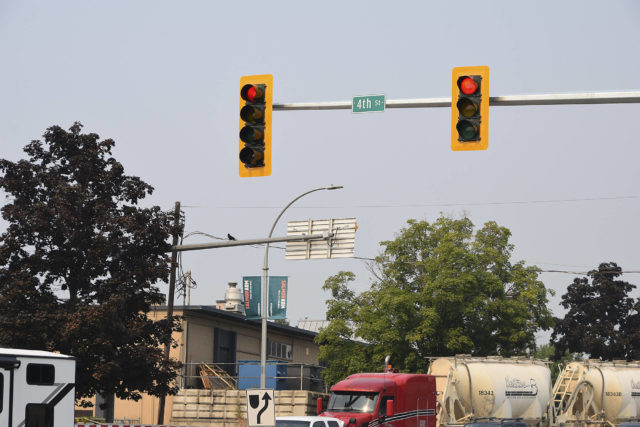 Debbie McGregor wrote to council on July 21, explaining she was sitting on the Barley Station Brew Pub’s patio the night prior when she witnessed two semis run through traffic lights that had already turned red.

She said the city clearly does not have enough law enforcement in the area and asked what the city’s plan is.

“I understand red-light cameras work, because the semi drivers share the info that there are red light cameras so then they go slow. I already spoke to MOT (Ministry of Transportation) and they think this is an enforcement issue that has nothing to do with them. They told me it’s an RCMP and CVSE (Commercial Vehicle Safety and Enforcement) issue…,” McGregor wrote.

She asked if she should start a petition, or if the city would set up a team to address the problem.

“What can I help do on this? You all know this is a major problem, so what’s the plan; just wait until another person is killed?” she asked.

Coun. Kevin Flynn said he has also sat in the same spot and, while it seems like the semis are going fast and running lights, in most cases he thinks they’re at a stage in the traffic light where stopping would be more dangerous than continuing through.

“I’m not saying that’s a good thing, but I do think that we have to recognize that stopping a semi is not the same as stopping a car when the light changes to yellow.”

He added: “That being said, I’m wondering if it’s time to revisit the red light cameras. I’m not sure that’s the solution, I’m not sure a decreased speed limit on that stretch is a solution.”

Flynn suggested a warning flashing light at the west end of the corridor before Shuswap Street, like the one beside the new light at Fourth Street, might be useful. He said he’d also like to see the one at the east end moved farther up the hill.

Rob Niewenhuizen, the city’s director of engineering and public works, said staff already requested the flashing lights on the east end be moved farther up the hill and the ministry is looking into it.

Regarding the Shuswap Street end, he said it’s not justified as there are good sight lines to the signals.

“There is no reason why you can’t see the lights changing.”

However, he said the ministry agreed in 2019 that when the changes to the intersections along the downtown corridor were complete, about a year after they would be reviewed again regarding safety and a red light camera.

Niewenhuizen said staff will monitor the corridor and then revisit with the ministry in a year.

Flynn added that he’s heard nothing but extremely positive comments about the left-turn signals on the new intersection and all the safety improvements.