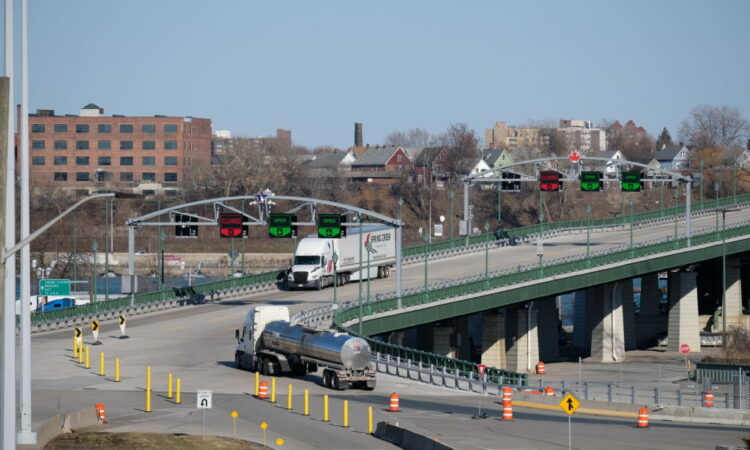 Cross-border trucking opens up many new horizons for drivers. But on top of the additional earning opportunities comes greater scrutiny, and a new set of rules and regulations to understand.

A good carrier partner can help with everything from training to mentoring and support. The carriers to avoid are those that figure you should already know it all, turning you loose to sink or swim.

It’s the same with the paperwork of international commerce. The process is fairly streamlined, but certain procedures have to be followed. Carriers can walk drivers through all that, and good carriers will offer support and guidance along the way.

Are you even admissible?

To be a cross-border driver, you must first be admissible to the United States. Immigration regulations and policies there have long held that alien truck drivers may be admitted as “B-1 visitors for business” so they can pick up or deliver cargo for international commerce. But that doesn’t necessarily mean all truck drivers qualify.

Anyone can be denied entry to the U.S. for any reason or no reason — at least, no fathomable reason. U.S. Customs and Border Protection officers have sweeping discretionary powers and are not obligated to grant you entry to their country. An officer may not like your attitude or your tattoos or the color of your truck. There’s little room for appeal. There’s no talking to supervisor for a second opinion.

Short of running into an officer who got up on the wrong side of the bed, there are general entry requirements as a visitor for business under the Immigration and Nationality Act of 1952 (INA).

To qualify as a bona fide visitor for business, a truck driver must:

Among the most common reasons for denying entry is an untruthful declaration during the primary inspection at the booth. Officers will often ask if you have a criminal record or if you have ever been arrested or fingerprinted. If you answer no to any of those questions, but the records the officer can read on the computer indicate otherwise, you may get sent inside for further interrogation, and possibly be sent back to Canada.

Questions about criminal records are straightforward enough. If you have a conviction for which you have not received a pardon, the record will appear on the CBP database. Depending on the nature of the conviction, it could be grounds for inadmissibility. Most carriers conduct criminal record searches prior to hiring, and a record search is part of the FAST (Free and Secure Trade) card application.

However, questions regarding arrests or fingerprinting should be answered truthfully. The event that led to the arrest and subsequent fingerprinting may not have resulted in a conviction — and would not appear on a criminal record search — but CPB may have that information on file. Enter the risks of the untruthful declaration.

Even if your criminal charges are dismissed, stayed, withdrawn or acquitted, or conditional or absolutely discharged, you can be denied entry to the U.S. Once you have been denied entry the first time, it’s very difficult to return to the U.S.

If becoming a cross-border driver is on your agenda, and you have previous convictions, it’s strongly recommended that you apply for a pardon before applying for your FAST card.

Sometimes called a Record Suspension under the Criminal Records Act, pardons do not erase the record completely, but the record of the conviction is hidden from view and will not appear during a criminal record search. Earning a pardon isn’t a slam dunk, though. If you are a repeat offender, or have recent convictions, you may not be eligible for a pardon.

Even if you have previously been denied entry to the U.S., you can apply for a U.S. Entry Waiver, also known as an I-192 or I-194 form. They are usually issued for limited terms such as two or five years. Various agencies can help procure pardons or the U.S. entry waivers.

A different set of rules apply for drivers who are not Canadian citizens or are in Canada on temporary work visas. Drivers in these situations should consult their sponsoring companies for the proper procedures.

There’s much to know about operating in the U.S., but if you learn nothing more from this article, know that foreign drivers are not allowed to pick up and deliver domestic shipments within the U.S. The technical term for regulations involving foreign carriers making point-to-point moves within the U.S. is “cabotage”. In trucking, the practice is commonly referred to as “interstating”.

As a matter of convenience and profitability, Canadian carriers have been known to try reducing the expense of long deadhead trips by hauling domestic freight between two U.S. locations. Inexperienced drivers may be convinced by dispatchers that such moves are allowed under U.S. law, but rest assured, they are not.

For example, let’s say you haul a load from Toronto to Miami, pick up a load in Miami for delivery in Baltimore, unload in Baltimore, and reload for a trip to Toronto. Interestingly — or confusingly – U.S. customs regulations allow such moves using Canadian equipment. But a Canadian driver is not allowed to drive the truck. U.S. immigration regulations prohibit such moves.

Canadian lobby groups have for years been seeking concessions from American regulators, particularly with respect to trailer repositioning. So far, they have been unsuccessful.

Drivers caught engaging in prohibited activities risk permanent or temporary bans from operating in the U.S., possible equipment and cargo seizures, and some pretty steep fines.

If you are truck driver new to the industry or looking to work with a cross-border carrier for the first time, try to sign on with a company that knows what it’s doing and has the horsepower to help you make the transition.

There’s a lot to learn when it comes to grappling with cross-border paperwork and the border crossing process. You don’t want to try to figure it all out for yourself. The risks of making a mistake are high, and the consequences could be severe.

Some carriers are just not equipped to execute all the behind-the-scenes footwork that might be needed to fix a mistake or sort out problems. Partner with a carrier that will provide the training you’ll need, not just hand you the paperwork and wish you luck.