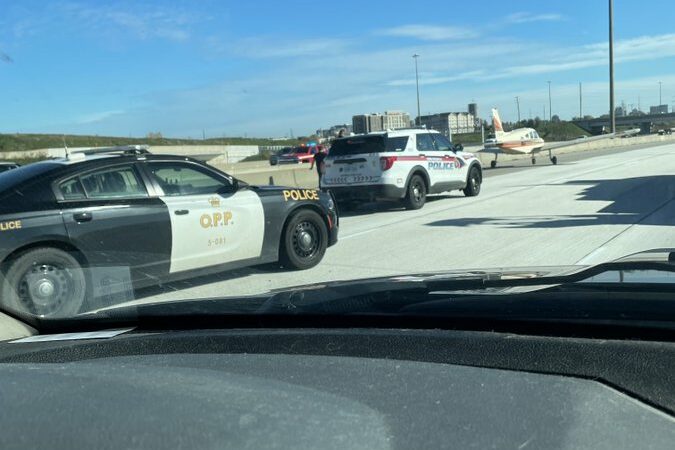 The pilot of a plane that made an emergency landing on Highway 407 in Markham on Wednesday morning says touching down on the busy roadway was his only safe option.

The plane touched down in the eastbound lanes of the highway near Woodbine Avenue off ramp sometime before 11 a.m.

An image circulating on social media showed a single engine propeller plane on the roadway, with police vehicles parked behind it.

“They experienced at some engine sputtering. They looked back at the airfield to see if they could make it back to Buttonville,” he said.

He said the plane had just completed regular maintenance prior to the flight.

The pilot told the OPP he departed Buttonville Airport and reached an altitude of 2,000 feet when the engine on the plane began to sputter.

“Once we turned towards Buttonville, we knew we couldn’t make the field, it was a really tough decision,” the pilot, who police identified as Ibrahim, said. “At that point we had to turn right for the highway.”

He said he and his co-pilot tried to restart the plane’s engine, but assumed it was not coming back.

He said putting down on the highway was his only viable option.

“It was either this or the buildings. I was happy this worked out.”

Speaking with CP24 on Wednesday afternoon, flight instructor Daniel Gustin said that the area surrounding Buttonville airport “is built up everywhere” and there just isn’t a lot of options for pilots in the event of engine failure.

“There is not a lot of good fields within probably the first four or five miles so if an engine did quit you as a pilot would really just have to rely on the 404, the DVP or in this case the 407 being completely open and just hope for the best outcome,” he said. “We as pilots we are not taugh to turn around and actually try to make it back to the departure field because that can be a even more dangerous scenario.”

Highway 407 ETR says three lanes of the highway were blocked for a period of time due to emergency crew response.

The OPP is conducting an investigation into the incident.

Schmidt said the plane did not sustain any damage and both occupants emerged unharmed.