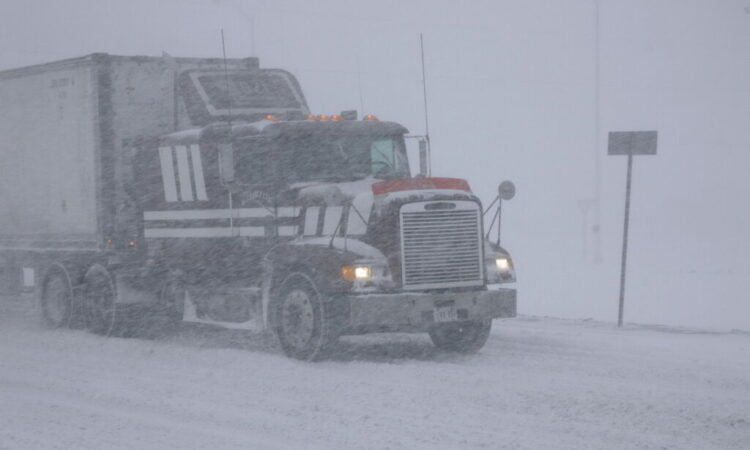 Winter driving is part of a professional driver’s life in Canada, and it must be taken seriously. Nothing can prepare you for the pucker-inducing moment when the blowing snow from a passing truck completely obscures your view of the road. Or when you drive into a white-out and all sense of direction — right or left, up or down – disappears behind a wall of impenetrable white.

We are not trying to scare anybody, but that’s what can happen in the winter. All you can do is be ready for it. But it’s not just the snow drifts and white-outs you need to worry about. Perils lurk in the shadows, even on bright sunny days, and in seemingly low-risk places like parking lots and loading docks.

Your two greatest concerns with winter driving are visibility and traction. Obviously, you always want to maintain as much of both as you can, but there will come moments when you find yourself desperately short of one or the other. Ideally, you want to avoid situations like that. You definitely don’t want to put yourself into such a situation, but when it happens, the key is to react properly and not to panic.

You cannot react to what you can’t see. If forward vision is suddenly obscured by blowing snow or blizzard conditions, resist the urge to stop. You might become the first vehicle in a nasty chain reaction crash. Since you’re a prudent professional driver, you will have already slowed down to adjust for the changing conditions, right?

Traffic will not suddenly appear in front of you just because of the whiteout. In such driving conditions, you must maintain situational awareness so that you know what’s out front, even if it’s temporarily obscured from view.

Temporary whiteouts — such as those caused by passing trucks kicking up loose snow from the road, or windy conditions that cause streamers of snow to blow across open landscapes — are just that. Temporary. Maintain your course and steer carefully. It may help to glance at the shoulder of the road and gauge its position to help maintain your position in the lane. However, everyone has a tendency to steer in the direction they’re looking, so prolonged staring at the shoulder can cause the truck to drift in that direction. Glance rather than stare at the edge of the road as a lane position guide.

Steady blizzard conditions require a different approach. Prolonged poor visibility demands that you drive at a speed at which your forward vision is at least equal to your stopping distance. Never over-drive your headlights. Since you have prudently slowed down for the poor conditions, some yahoo will of course pass you, causing a temporary whiteout situation. Maintain course and speed, and resist the urge to apply the brakes. You don’t know how the driver behind you is reacting to the situation.

Staring into the oncoming barrage of snowflakes in the headlights can cause a sort of hypnosis, where it’s easy to fixate on the snow’s motion. It’s a bit like staring into a cone with snow flying out of it. Be aware this can happen. To prevent it, keep your eyes moving through your field of vision rather than staring straight ahead.

If poor visibility persists longer than a few seconds, slow the truck gradually with a gentle brake application – just enough the make the brake lights come on. Any sudden adjustments in speed could cause a rear-end collision or a loss of traction if conditions are poor enough.

A lot of drivers overestimate the amount of traction they have in winter, or they don’t fully understand the threats that exist to what little traction they have. In most cases, deep snow isn’t the problem. Pulling heavy trailers through deep snow obviously requires tires built to do just that. If that’s the job you do, chances are your truck will have deep-lug open-shoulder drive tires.

The threat to many over-the-road trucks is a tire tread that’s too shallow, or low-rolling-resistance tires that have naturally tight tread patterns and fairly shallow treads. Such tires are fine on dry pavement, but they are easily overwhelmed on cold, hard, slippery surfaces such as packed snow and ice. In most cases, getting the truck moving on slippery surfaces with such tires isn’t the biggest problem; the problem is maintaining traction during braking and directional control when steering.

We find hard-packed snow on highways when tires continually run over loose snow, packing it down into a hard, slippery surface. It doesn’t take much to radically change the pavement’s coefficient of friction when it’s covered with hard-packed snow. Gone is the pavement’s normally rough surface texture, replaced by a smooth, slippery coating of what amounts to ice. There’s little there to provide friction between the pavement and the tire tread.

If your tire condition is marginal, you’re at greater risk of a traction shortage. The worst-case scenario on an icy surface is a lightly loaded, over-inflated tire with a shallow tread.

Possibly compounding the problem is the false assumption that anti-lock brakes (ABS) and electronic stability control (ESC) will save your skin in a hard-braking scenario. It probably won’t. It’s foolhardy to drive in a manner that pushes those systems beyond their capability.

A few minutes of searching YouTube will bring up dozens of crash videos with trucks jackknifing and sliding all over the place, causing multi-vehicle pileups. Some of those videos are bound to be from the dozens of crashes we witnessed last winter along Hwy. 401 in southern Ontario.

Most of those trucks would have been equipped with at least ABS, and some may have also had ESC. So why do they jackknife? The dynamics of the incident simply exceeded the systems’ ability to intervene. As a driver, are you prepared to trust those systems under those conditions? You’d be far better off adjusting speed and following distance so that you never have to put the system to the test.

The dynamics of a jackknife are easy to understand, but maybe a little hard to get your head around.

The situation is a bit different when a tractor skids. If the drive wheels lock up, the momentum of the trailer literally pushes the tractor out of the way. Because of its short wheelbase, the tractor quickly turns backward until the side of the cab smashes into the trailer and whole twisted mess just careens forward until something stops it – like another truck or a car.

Once the wheels lock up and begin to skid, little can be done to correct the situation. The problem with ABS in these situations is that it often doesn’t react quickly enough. This is especially true when a trailer is lightly loaded. Or because of factors like cold temperatures binding up the grease in the brake actuators at the wheels. The brakes do not release fast enough for the wheels to regain traction. That’s often a maintenance issue, not a problem with the ABS.

While it’s useful to understand how jackknifes happen, the far greater lesson is that you are better off avoiding situations where jackknifes might occur. In other words, slow down and maintain a safe following distance.

Safe, in this instance, is a moving target. Three to four seconds of following distance might be acceptable on clean and dry pavement. On snowy roads, double the following distance that you would adopt on clean and dry surfaces. Frankly, the more the better. But at some point it becomes impossible because of other drivers cutting in and taking away your safety margin.

All you can do is back off and re-establish that safe distance.