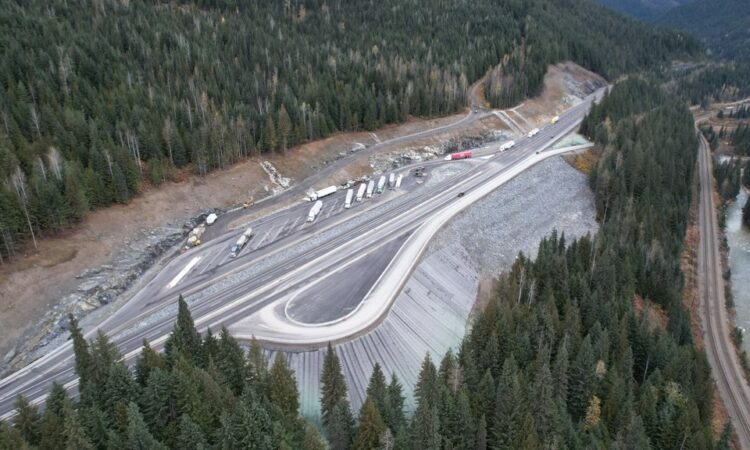 The Illecillewaet four-laning and brake-check project is completed, significantly improving safety for people who travel along this section of Highway 1.

“With the completion of the Illecillewaet four-laning project, local residents and commercial drivers will benefit from improved safety and reduced travel time on this important stretch of highway,” said Patrick Weiler, MP for West Vancouver—Sunshine Coast—Sea to Sky Country on behalf of the Honourable Dominic LeBlanc, federal Minister of Intergovernmental Affairs, Infrastructure and Communities. “Working with our provincial partners, the Government of Canada is investing in infrastructure projects like this to increase the quality of life for residents, improve the flow of trade, and build more prosperous communities.”

The project, located approximately 42 kilometres east of Revelstoke, includes two kilometres of highway widening from two lanes to four, and new median barrier for enhanced safety and to prevent cross-over crashes. The four-laning project also provides a safe location for staging vehicles in the event of a closure.

“It’s exciting to have this important safety improvement project reach completion,” said Rob Fleming, B.C.’s Minister of Transportation and Infrastructure. “The widening of this segment of Highway 1 and the expansion of the brake-check make this a safer, more reliable drive for everyone from locals, to tourists, to commercial truck drivers carrying goods. This project is a key part of our work to upgrade the Trans-Canada Highway from Kamloops to the Alberta border.”

The project also expanded the existing brake-check area to accommodate up to 15 commercial trucks (up from the previous capacity of five trucks), added acceleration and deceleration lanes for commercial vehicles entering and leaving the brake check, and expanded and improved the site’s lighting and washroom facilities.

“It’s great to see this project completed. The travelling public will appreciate the safety improvements that have been made here and commercial truck drivers will welcome the widening of this stretch of highway as well the improved brake-check area,” said Gary Sulz, mayor of Revelstoke. “An extensive amount of work has been done to increase safety and capacity along this stretch, and I am grateful for the ongoing improvements being made to the Trans-Canada Highway.”

This was the first of several upgrade projects on the Trans-Canada Highway between Kamloops and Alberta to be built using a Community Benefits Agreement (CBA). Community benefits include job and training opportunities for people in the local area and increasing the participation of apprentices and workers traditionally under-represented in the construction trades, such as Indigenous Peoples, women, and people with disabilities. The CBA also promotes a safe, respectful work environment.

The CBA’s priority hiring system means qualified tradespeople from under-represented groups get jobs on CBA projects. On the Illecillewaet project:

The $85.2-million Illecillewaet four-laning project was cost-shared, with the Government of Canada contributing as much as $15.5 million through the Provincial-Territorial Infrastructure Component of the New Building Canada Fund, and the Province providing the remaining $69.7 million.