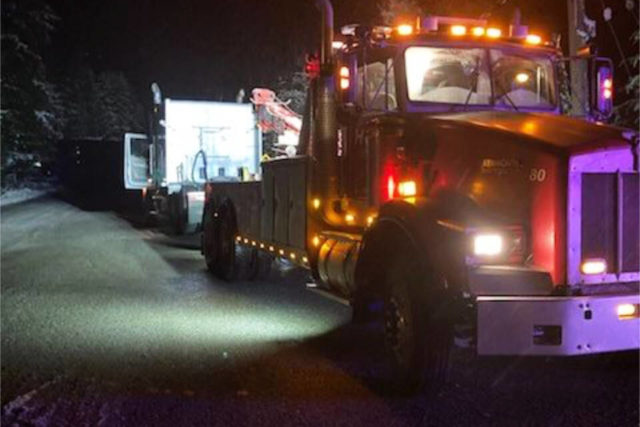 A commercial truck driver won’t be getting behind the wheel for a while after driving 96 km/h in a 50 km/h zone on Highway 3 on Monday night (Dec. 6).

CVSE along with BC Highway Patrol are out in full force with zero tolerance on speeding and dangerous driving along Highway 3 since it became the only route for transport trucks, said BC Transportation.

This speeding incident comes after a commercial truck driver was caught on dash cam overtaking another semi across a double line and past a curve on 5A on Dec. 2.

Transportation BC, which handles commercial vehicle safety and enforcement, is aware of the video and the incident, and its staff plans to get in touch with the carrier company involved.

Transport truck traffic from the Lower Mainland to the Interior and the rest of Canada must go through Highway 3 and 5A after the Coquihalla was closed from flooding damage.

This has led to several fatal crashes including one head-on crash involving two semis on Highway 3.

“Please don’t sacrifice safety for speed — we get the pressures you are under. B.C . can’t afford a long highway closure due to Commercial Motor Vehicle crashes,” said BC Highway Patrol.