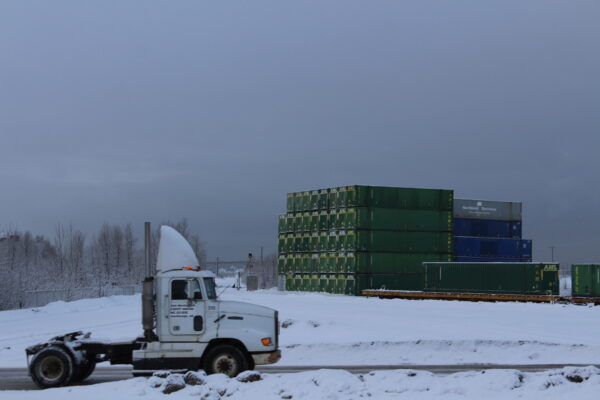 Dick Rankins, the owner of Alaska-based Sleipner Transport, said the COVID-19 vaccine mandate for Americans going through Canada has already had a big impact on his business.

Since Jan. 15, when it went into effect, he estimates he’s lost 80% of his drivers. This past weekend, he said, he couldn’t find a driver to pick up a load from the Lower 48 to haul up to Alaska.

His company, headquartered in Eagle River, specializes in hauling fresh produce up the Alcan Highway through Canada to stock Alaska shelves. The freight from that load still made it to Alaska, said Rankins, but at a significantly higher price since it was shipped on an airplane instead of overland.

Rankins said he wants Canada to get rid of its requirement that truckers be vaccinated to cross the border. Others in the industry do too, as do some politicians, including a group of more than two dozen Alaska state legislators. They argue that the mandate is leading to driver shortages that could have a major impact on the price of everything from beef at the grocery store in Anchorage to hay for livestock in the Mat-Su to earth-moving equipment for the oil industry on the North Slope.

But on the other side, Prime Minister Justin Trudeau of Canada has argued the vaccine mandate is intended to slow the spread of COVID-19 and said conservative politicians’ claims that its disrupting the supply chain and increasing inflation are “fear mongering,” reported Reuters.

It’s not clear exactly how many Alaska truckers have quit over the mandate.

The national association says about 60% of American truckers have at least two doses of a COVID-19 vaccine. Joe Michel, president of the Alaska Trucking Association, suspects Alaska truckers have a similar vaccination rate, though there’s no precise data. He said many who are unvaccinated don’t stop working, they just find new jobs hauling cargo within the state where there’s already a high demand for qualified drivers.

“I don’t want to say the sky is falling, it’s just an extreme inconvenience for no good reason,” said Michel. “Of all the different ways to put hiccups in the supply chain, this just seems like a real silly one.”

The issue caught the attention of a bipartisan group of 28 state lawmakers including Rep. Ken McCarty, R-Eagle River, who helped pen letters last week to the White House and Trudeau asking to pause the mandate. They said that the trucking industry is critical for Alaskans, and drivers pose little risk to communities they pass through.

“They stay in the truck, and they drive right through, and the only time that will stop is for fuel or go to the bathroom,” said McCarty. “Even if they rest, they can be in their cab.”

So far, lawmakers haven’t gotten any signs from President Joe Biden or Trudeau that they intend to lift the rule, even as a caravan of big rigs carrying hundreds truckers descends on Ottawa in protest. Biden and Trudeau have argued that the mandate will ultimately keep drivers on the road by preventing illness or death that COVID-19 can cause.

But people in the industry said they haven’t heard of many truckers getting vaccinated in order to haul a cross-border load.

“I don’t think the mandates are forcing many truckers at all to do that because everybody, every company needs another experienced driver,” said Michel.

Economists, meanwhile, say it’s hard to pin down the exact impact the vaccine requirement will have on the average Alaskan both because of the dearth of data on the number of truckers who have quit over the requirement, and because shippers aren’t required to disclose what’s in their containers.

“It becomes a bit of a guessing game,” said Darren Prokop, a logistics professor at the University of Alaska Anchorage.

Prokop said industries impacted could range from the oil and gas sector, which hauls some big equipment on the highway through Canada, to moving companies, particularly those moving military members and their families.

As for groceries and other supplies, Prokop said researchers do know that 80% of all consumer goods pass through either the Port of Alaska in Anchorage or the port in Whittier. That includes most food at the grocery store, but some unknown percentage of fresh produce gets hauled up the highway through Canada.

With fewer truckers, he said, there could be delays getting those supplies to Alaska, and likely higher prices.

That’s already playing out for some companies, like 49th Freight based in Anchorage. Clyde Carey, the owner, says even before the vaccine requirement, driver shortages forced him to make a double-digit percent increase in the prices he pays drivers to haul a load through Canada.

He said that trend of increasing prices is likely to continue.

“I just don’t see right now why it wouldn’t unless the vaccine mandate is lifted, or things start to cool off at the port and Lower 48,” he said.

Carey said he doesn’t have much choice but to pass that on to the buyers.

“It’s going to definitely cause pricing here on the stuff that we buy,” he said.