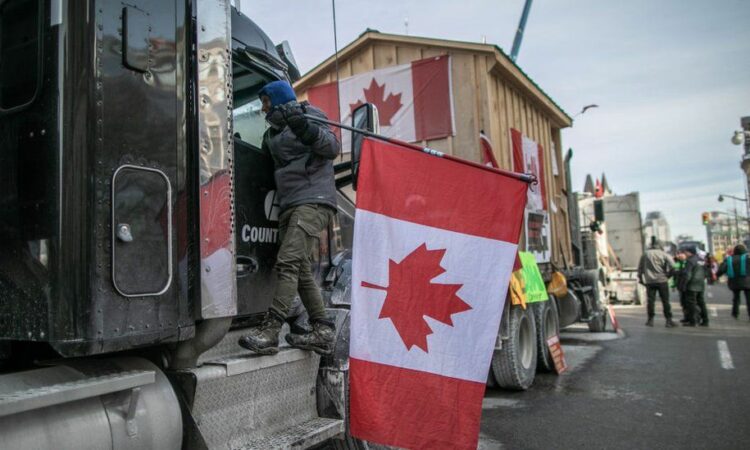 GoFundMe has paused donations to truck drivers protesting against vaccine mandates in Canada.

A number of officials have suggested legal action against the platform to prevent the release of more funds.

Nearly a week-long, the protest began over a mandate requiring Covid jabs to cross the US-Canada border.

“This fundraiser is currently paused and under review to ensure it complies with our terms of service and applicable laws and regulations,” said a notice that appeared on the Freedom Convoy donations page on Wednesday.

“Our team is working 24/7 and doing all we can to protect both organizers and donors. Thank you for your patience.”

Protest leaders have yet to comment on the move by GoFundMe.

Earlier on Wednesday, Ottawa Police Chief Peter Sloly suggested that many of the donations had come from the United States.

CBC News reports that other donors left comments saying they were located in the UK, Australia and Poland.

When asked by reporters what measures might be needed to end the protests in Ottawa, which have dwindled in recent days, the police chief refused to rule out military intervention.

“Most demonstrators have left,” Chief Sloly said. “What remains is a highly determined and highly volatile group of unlawful individuals.”

He conceded the protest would probably grow again this weekend and “there may not be a policing solution” to resolve the impasse.

On Wednesday, Royal Canadian Mounted Police reached a breakthrough deal with protesters to open access to a border crossing near Coutts, Alberta.

The roughly 250 residents of Coutts, a small border village just off the highway, have been unable to access basic services like groceries and gas since the weekend, according to Mayor Jim Willett.

By Wednesday evening, two lanes of traffic were open, with one going in each direction.

Chad Williamson, a lawyer for the truckers, told CTV News that “frankly, the protesters feel their message has been heard.”

“Nobody wants this blockade to happen any more,” he continued, adding: “But this isn’t over.”

The Freedom Convoy began in response to a federal vaccine mandate imposed by the Canadian government on 15 January that requires unvaccinated truckers returning from across the US border to quarantine.

Supporters are also pushing for the repeal of other Covid-19 restrictions they view as government overreach.