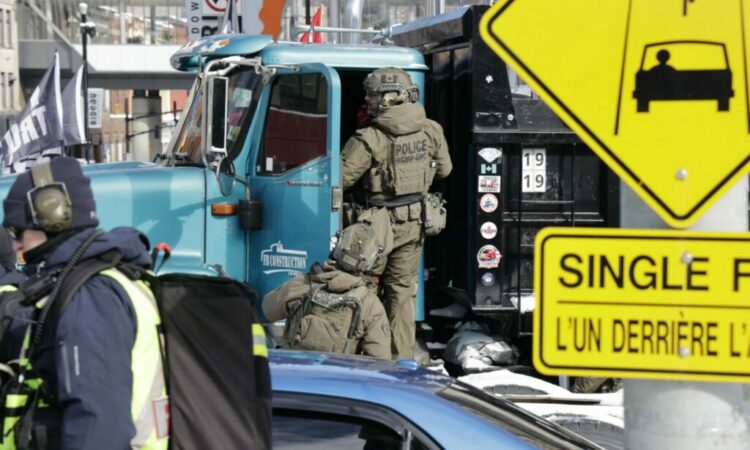 Before I write anything else, let me start this way. While I’m passionately in favor of Covid-19 vaccines for all, I think it was a massive and unnecessary over-reach by both Canada and the U.S. to demand that border-crossing truck drivers be vaccinated. It makes no sense to me at all.

I mean, think about it. If I put a mask on, I can go spend an hour or so wandering around Canadian Tire, then stride down the road and do my shopping at a supermarket, and finish up at my favorite fish and chips restaurant. Only the latter requires me to show proof of vaccination.

How many people I might come into contact with, some fairly close? Dozens and dozens, maybe 100 on a busy day.

A truck driver running from, say, Winnipeg to Dallas over a few days would encounter how many folks closely enough to notice? Probably well under 10.

So where’s the sense in a mandate? I sure can’t find it.

Nor can I find any justification for all the mayhem in Ottawa. By all means, we have the right to protest, but it was never about trucking anyway.

Long before a single rig was escorted onto Wellington Street by the dimwitted Ottawa police, the whole thing had been orchestrated by people with various axes to grind – including a card-carrying member of the western-separatist Maverick Party and a nutbar with a Memorandum of Understanding with which he believed he could succeed in dissolving Parliament. None of those ‘axes’ had anything to do with border mandates or any other trucking issues. In fact, those organizers were gifted unhappiness with the border mandates to rile up truckers and get them on board. The common denominators seemed simply to be, “We hate Trudeau and we don’t like pandemic restrictions.” Some truck drivers share those motivations, but to call this a truckers’ protest is ludicrous. We were duped.

In all the blather we heard for three weeks, was there ever a voice speaking for truckers about real trucking issues? Nope. There was nobody there to raise the issues we actually should be bitching about – truck parking, driver training, and a dozen others. As I’ve written before, we need a leader and could have used one in Ottawa.

But more often than not it was, and still is, referred to as the “truckers’ protest convoy” here, in the U.S., and around the globe. And that does our industry a huge disservice.

Our image in the public’s eye – and I’ll include the politicians and bureaucrats we should be trying to win over – took a big hit, and we’ll need years and years to recover. You and I know better, but the average man in the street now associates us with white supremacists and would-be insurrectionists. By all accounts the worst of those yahoos were chased out by “mainstream” protesters, but not before the image damage was well and truly done.

Here’s an example of what we face now, a column written by former NDP strategist Robin V. Sears published in the Toronto Star and its various “satellite” newspapers on Feb. 27. The title? “Now that we have seen how trucks can be used as weapons, it’s time we rethink how to live with them.”

Among several wacky proposals, he wants to see a tunnel built under the Ottawa River to keep trucks under control because “…the truck fleets pass within metres of the prime minister’s office, Parliament and the Supreme Court. A single truck bomb could destroy any one of these government pillars.”

Has he never heard of car bombs?

Sears worries about Toronto, too, wanting to route trucks onto the tolled Highway 407 away from the 401, to keep them away from the hospitals and the Ontario Legislature on Avenue Road. In fact, it’s a rare thing to see a tractor-trailer along that busy north-south road. He thinks trucks only enter Toronto “to get gas” and it’s too easy from Highway 401. Sure does know trucking.

Anyway, that’s what the siege of Ottawa has brought us. Fear-mongering like that and a very black eye. The industry has had image trouble for as long as I can remember, and now it’s just that much worse. It really will take years to recover.