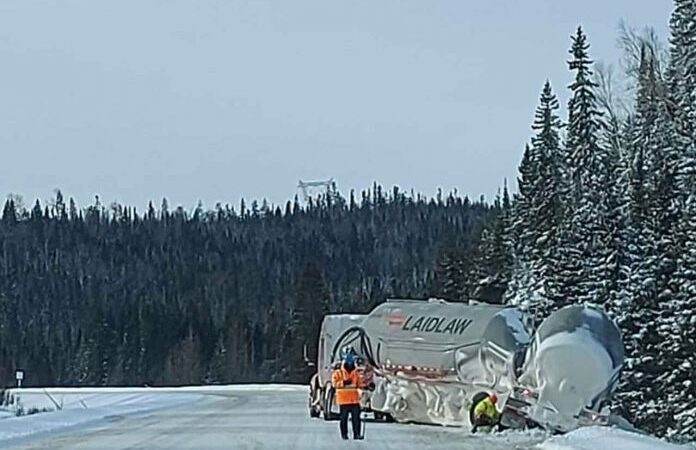 Over the course of the past six months, a combination of weather, and collisions involving transport trucks, Highway 11 and Highway 17 have been closed far more than normal.

How many collisions at Sistonen’s Corner will it take before a better means of controlling that intersection will be implemented? How many deaths and injuries will it take?

A recent incident involving a transport truck that flipped on its side as it attempted to turn from Dawson Road onto the Thunder Bay Expressway is sadly only the latest example of why the federal government needs to get more engaged in inter-provincial transportation.

The OPP investigation into that incident discovered an obvious and apparent weakness in the system.

The OPP investigation revealed that the vehicle had been involved in a collision several days prior in Saskatchewan and was deemed unfit to operate on a highway.

The Company is subsequently being charged with permit operation of an un-safe Commercial Motor Vehicle, contrary to section 84(1.1) of the Highway Traffic Act.

The question becomes how did that vehicle get from Saskatchewan, through Manitoba, and then into Ontario?

There are inspection stations for transport trucks in Manitoba and then again into Ontario. One would think in today’s world with instantaneous transfer of information that once that transport truck had been deemed unfit, that should have been enough to take the vehicle off of the road.

Now, the charge laid by the OPP has yet to be proven in court, but perhaps what is needed is improved federal oversight into interprovincial transportation.

Truck inspection stations should be operating 24-hours a day – seven days a week.

There needs to be real solutions found here

There is a shortage of transport truck drivers in Canada. What it looks like is that to meet that shortage, standards have been lowered.

Solving that likely is a big job, long-distance trucking is a lonely life, and getting people wanting to work in the industry is hard.

Perhaps a solution should include a federal standard for transport driver training.

One Ontario provincial leader told NetNewsLedger one of the issues is that in some provinces it is far easier to get a licence, and some of the standards for maintaining transport trucks are less stringent.

Provincial Premiers should be putting this issue atop the next Premier’s meeting.

Perhaps the Prime Minister and federal minister of transport should start to examine how to make sure our highways are safer, and that there are national standards for transport truck drivers.

Solving this issue might not be as hard as it looks. All it will take is political will.

With the supply chain problems facing our economy, having Highway 11 and Highway 17 closed is putting a huge economic impact on Canadians.

While Ontario has announced twinning of the highway from Kenora to the Manitoba provincial boundary as well as continued twinning between Thunder Bay and Nipigon, what is needed is a long-term plan – a national vision – of twinning the Trans-Canada Highway from coast to coast.