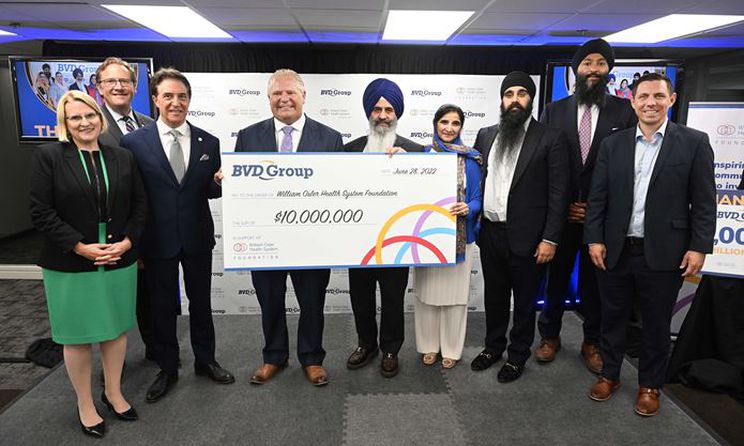 A family-run Brampton trucking company has donated $10 million to support health care in Brampton and Etobicoke.

Dhillon said all four of his kids and nine grandchildren were born in Brampton and Etobicoke hospitals.

“This community has given so much to my family, and this donation is the best way to give back, and touch everyone in the community. We will all need health care and there’s no better time to contribute — in whatever way we can — to help our hospitals. I hope others will step forward and support our hospitals; every dollar counts to ensure that our community has the health care it needs and deserves,” said Dhillon in a release.

Ken Mayhew, the president and CEO of William Osler Health System Foundation, called Dhillon and his family an inspiration to the entire community.

“Mr. Dhillon came to Canada 40 years ago and built BVD Group from the ground, up, becoming a pillar in the Canadian transportation industry. Together, with his family, they are helping to advance health care in Brampton and Etobicoke to benefit our communities now and for future generations. We are grateful to Mr. Dhillon, the Dhillon family, and BVD Group for their generous donation and philanthropic leadership,” said Mayhew in a release.

According to Osler, the funds will go toward the hospital system’s “greatest equipment and redevelopment needs and help strengthen health care in Brampton and Etobicoke for years to come.”

“This incredible gift from the Dhillon family and BVD Group is a game changer for our communities,” said Dr. Frank Martino, interim president and CEO of William Osler Health System, in a release. “On behalf of Osler’s team of staff, physicians and volunteers who go beyond to serve our communities, we thank Bikram Dhillon, the Dhillon family, and BVD Group for supporting exceptional health care close to home.”

Ontario Premier Doug Ford, Health Minister Sylvia Jones and President of the Treasury Board Prabmeet Sarkaria were on hand for the announcement alongside Brampton Mayor Patrick Brown.

“Today’s announcement shows what can happen when we all work together to transform health care for the people of Ontario,” said Ford in a release. “On behalf of the Ontario government, I thank Mr. Bikram Dhillon, the Dhillon family, and the BVD Group for their tremendous generosity and for supporting a future that has never been brighter for this community.”