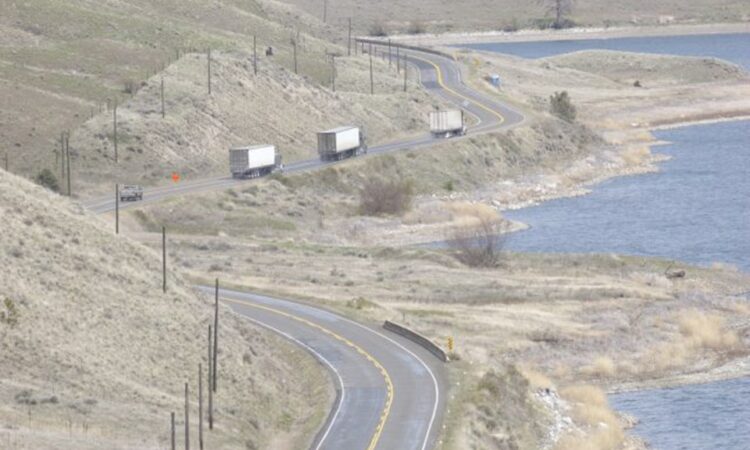 A new Facebook page has been launched, with the aim of improving safety along Highway 5A south of Kamloops, with drivers encouraged to report incidents with semis along the route.

The page, called Highway 5A -Safety First- Facts, Figures & Events, was created by Bob Price, who is asking people to post about their experiences on the highway and report incidents to police and Commercial Vehicle Safety and Enforcement (CVSE).

“If we can identify the trucking companies involved, we’re going to identify them and the bad drivers. The driving of some of these truckers just makes your head spin,” Price said.

The page is Price’s latest effort to urge the government to ban truck traffic from Highway 5A, which connects Kamloops with Merritt.

It is also called the Old Merritt Highway as it was the main route between Kamloops and Merritt before the Coquihalla Highway opened in the 1980s.

Hundreds of people have joined the page and dozens have posted their experiences.

Price said there have been eight incidents involving semis hitting overpasses in Metro Vancouver in the past year, noting that has resulted in the Ministry of Transportation cancelling some trucking company licences. He said Highway 5A has far more than eight incidents per year, arguing the government needs to crack down on truckers who crash on  the rural highway, just as it has cracked down on truckers in the Lower Mainland.

“What we’re trying to do in the meantime is let the truckers know we have a lot of eyes on the highway. There’s dash-cams, everyone has a cellphone,” he said.

An Aug. 19 post by Facebook user Michelle Hintz describes the events that led to her reporting a trucker to CVSE.

“Every passing zone he hugged the centre line or drove down the middle of the road. Most corners he jerked his steering wheel nearly overturning his trailer. I was seriously expecting this guy to kill someone today,” she wrote in the post.

Hintz said the driver was pulled over at the weigh scales in Hope and ticketed for driving with an expired licence and without due care and attention.

“I do believe most truckers are good, professional drivers — it’s just ones like this guy who give them all a bad rap,” Hintz concluded in the post.

Price said some companies and truckers prefer the 5A route because “it’s all about money,” noting the lack of elevation changes along the highway.

“Their gas bill is lower and it’s easier on the brakes,” Price said. “The difference is, 5A is a goat trail. It’s two lanes of traffic in many areas that more resemble East Shuswap Road.”

A traffic study, which was conducted by Seero Engineering Consulting and commissioned by Stump Lake Ranch, was sent to the Ministry of of Transportation and Infrastructure, but Price said no action has been taken.

The study concluded Highway 5A had a higher rate of vehicle incidents compared to the Coquihalla, incidents that were caused mainly by road debris, collisions and vehicle recovery.

Price said B.C.’s trucking industry is “dead set” against shutting down any route in the province that a trucker wants to use. He said he suspects the government is wary of the matter ending up in court.

Another study noted by Price was conducted by the provincial government, but he said it has yet to see the light of day — and he thinks he knows why.

“We had one of the most respected traffic safety experts in Western Canada conduct our report. We’re not competing for engineering reports. The bottom line is, that we think they probably did their study to see if they could dispute anything we found,” he said.

“Put it this way. When I raised my children, I told them that if they weren’t talking about something, they probably weren’t proud of it.”