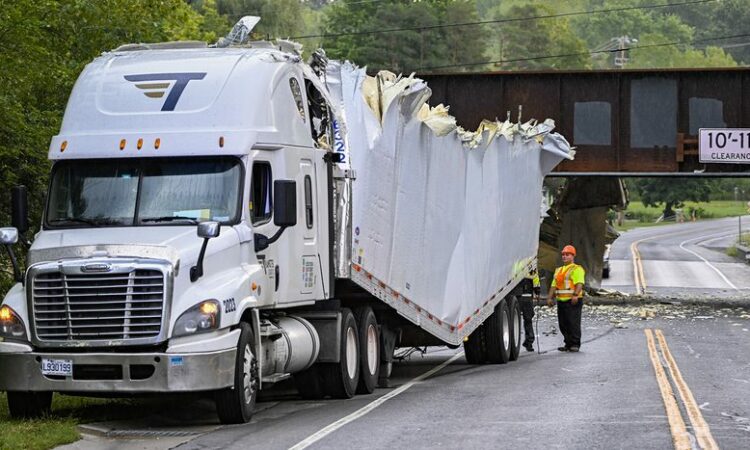 A Canadian man was ticketed Friday after hitting the Glenridge Road Bridge, shearing off the top of the produce-carrying trailer he was hauling.

Paul Kooduthottiyil, 30, of Ontario, Canada was ticketed with failing to obey a traffic control device and failing to adhere to the over-height limit — a town ordinance that could have a $500 fine in tow.

Police responded to Glenridge Road just before noon to find the trailer in a sort of ‘V’ shape with the roof hanging from the bridge.

Janik said he was not sure who the driver works for but that he was heading westbound from Clifton Park.

The chief said he was not aware of the reasoning the driver gave for hitting the bridge but was pretty sure it falls along the same lines as many, if not all, of the past hits to the bridge: the GPS took the driver that route and they didn’t see the signs.

Bridge strikes have been a frequent occurrence along Glenridge Road for years, prompting safety concerns from state and local officials and leading to hourslong road closures while crews work to dislodge stuck vehicles and clean up debris.

Last year, the state Department of Transportation unveiled a series of immediate and long-term plans to reduce the number of bridge strikes, including the installation of flashing beacons to supplement the 14 signs already in place warning drivers of the low bridge.

Most recently, the DOT paved a half-circle turnaround area on both sides of the street, giving over-height vehicles too tall to pass under the 10-foot, 11-inch bridge ample room to turn around before striking the structure.

The department is also in the process of designing a detection system that would trip whenever an over-height vehicle passes through, causing a pair of electronic messaging boards to display a warning that the vehicle is too tall to pass under the bridge and send a message to DOT’s Transportation Management System.

The system is expected to be installed sometime next year.

It is the second time the bridge has been struck since the turnaround areas were installed.

“It has worked in some situations,” said Glenville Supervisor Chris Koetzle, who was not surprised by the situation. “We have seen some people turn around in it, but yeah we are definitely waiting patiently for that laser beam to be deployed.”

Koetzle said he actually traveled under the bridge yesterday and was thinking about how much of a problem it’s been.

“You can’t raise the bridge, you can’t lower the road, there’s nothing you can do other than hope that people pay attention,” the supervisor said. “We’ve sent this message to the trucking industry repeatedly through trade groups, through chambers of commerce, through the state DOT — make sure you’re paying attention. It’s the simplest of messages but it’s just not getting through.”

The area was expected to reopen once the bridge was inspected, Janik said. Until then, it remained closed between Maple Avenue and Bruce Drive.