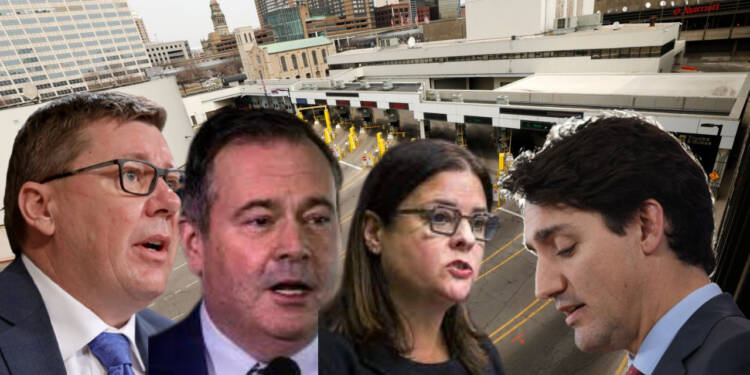 Neighbours geographically, friends historically, partners economically and allies necessarily are now exposed to some trade standoff. And who is to be held accountable for that? Canadian Prime Minister Justin Trudeau. Yes, we are talking about long-time trade partners, Canada and the US.

Canada and the United States (U.S.) enjoy a unique relationship. The two countries share a deep and long standing defence and national security partnership, providing both countries with greater security than could be achieved individually. Apart from that, trade and investment between Canada and the US. support millions of jobs. A secure and efficient flow of goods and people across the border is vital to both countries’ economic competitiveness and prosperity. But, all this seems to have come to a standstill ever since the world was hit by the pandemic.

The trade saw disruptions due to restricted hours of operation at the border. This hampered the flow of people and goods between the two nations extensively. The Canada-U.S land border ports have been operating at reduced hours now forcing travellers and transporters to drive further distances resulting in increased distance, fuel and labour costs.

Now, with the pandemic almost over, the operations should have resumed, but do you really expect anything sane from Trudeau? Now, even U.S president Joe Biden has agreed that the pandemic is over, but Trudeau can’t get over his diktats.

Despite knowing that resuming normal operating hours is critical to improving trade activity and reducing inflationary pressures on both sides of the border, Trudeau seems to take no action on the matter. He seems reluctant to break the hiatus faced by the two countries.

Trudeau’s inaction is also becoming a pain in the neck of Canadian provinces now. Provinces of Saskatchewan, Manitoba, Alberta, and US states Montana, and North Dakota have now united to call on U.S. President Joe Biden and Canada’s PM, Justin Trudeau, to look into the matter.

A tweet by Saskatchewan Premier Scott Moe reads, “Saskatchewan, Alberta, Manitoba, North Dakota, and Montana are calling on President Biden & Prime Minister Trudeau to immediately restore the pre-pandemic hours of operation at the border to ensure the efficient and steady flow of people and goods between our two nations.

But why is Justin Trudeau hesitant about rededicating the country to pre-pandemic levels? Not a long time back, Trudeau himself scrapped his vaccine mandate and followed in Biden’s footsteps in declaring the end of the pandemic. Then, why is he hesitant in resolving the trade hiatus on the U.S.- Canada border, which is responsible for carrying about 25% of the trade between Canada and US.

Probably, there is no need to rack your brains to think of the protests that Canada saw in February. The Canadian truckers’ protest rally that materialised owing to the government’s vaccine mandate rule. The vaccine mandate rule imposed by the Canadian government came into effect on  15th January 2022. According to the mandate, any unvaccinated Canadian truck driver re-entering Canada from the US will have to go through a COVID-19 test and also quarantine themselves.

According to the truckers, this vaccine mandate was sure to create fuel inflation and a shortage of commercial truck drivers. They believed this mandate by the Canadian government is bound to create some serious issues like supply chain constraints, inflation and unemployment. It will disrupt trade between the Canada and US and affect the livelihoods of many citizens dependent on this sector. According to them, the decision was also destined to badly affect the Canadian economy. And guess what? The truckers were far more sensible than their Prime Minister, who seems to make decisions instinctively.

The Prime Minister is now making a show of power to the truckers. He wants to harass them by hampering their business and eventually hurting the country’s employment and economy, which is exacerbating inflation in the country. This is nothing but another plan to punish the trucker, as he has been doing to every single person who had a connection with the Freedom Convoy protests.