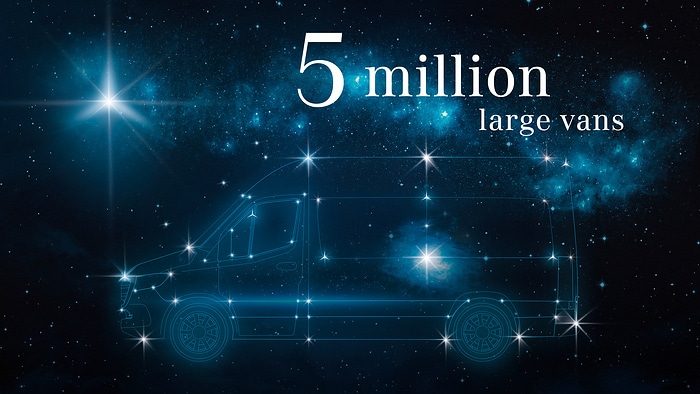 The Mercedes-Benz plant in Düsseldorf celebrated its 60th anniversary in April this year, and with that the next milestone on 5th October: the production of the 5 millionth van. As a van plant of the first hour, the ‘Bremer’ and the ‘Düsseldorfer’ rolled off the production line here as early as 1995. The 5 millionth van is an eSprinter, which has been produced in Düsseldorf since the end of 2019.

“With the 5 millionth van, we are celebrating a very special milestone at the Düsseldorf plant. On this production anniversary, I warmly congratulate the plant and the entire team, without whose innovative strength, professionalism and daily commitment, we would not be here today. I am looking forward to the future of Düsseldorf and especially to further milestones such as, from 2023, the next generation of the eSprinter,” says Michael Hellmann, site manager at the Mercedes‑Benz plant in Düsseldorf.

With the takeover of Auto-Union and integration into Daimler-Benz AG in the 1960s, the Düsseldorf plant, which is one of the world’s largest plants of the Mercedes-Benz Vans family, was founded. Since then, vans have been produced here for the vans division of Mercedes‑Benz AG, including the iconic Sprinter van, which is available in more than 130 countries, but also historical legends such as the ‘Bremer’ and the ‘Düsseldorfer’. Since 1995, the closed models of the Mercedes Benz Sprinter have been rolling off the production line here, which in addition to safety also stand for ergonomics, efficiency and comfort. Over the years, the production site has become one of the largest industrial employers and trainers in the region. This now includes around 5,900 employees and trainees, as well as 690,000 square meters of production space including shell construction, painting and assembly. With the prospect of the next generation eSprinter, 50 million € were invested in the Düsseldorf location, which will be used to adapt production and further training for employees.

For a more sustainable future: the next generation eSprinter

With the production of the eSprinter, Mercedes‑Benz Vans not only offers a sustainable solution for locally emission-free transport, but also sets new standards for urban delivery traffic. In close cooperation with customers from the CEP sector (courier, express and parcel service) as well as body manufacturers, the requirements for the next generation of eSprinters, which will go into production in the second half of 2023 first in Charleston (South Carolina) and then in Düsseldorf and Ludwigsfelde, were defined. “Sustainable production is another important step on the way to CO2 neutrality. We have already set up various measures and will continue to consistently develop our production and logistics processes in the direction of sustainability. “, explains Michael Hellmann. The planned production of the next eSprinter generation will be based on the newly developed ‘Electric Versatility Platform’, which will open up new customer segments as well as new markets such as the USA and Canada.

The approach of a holistic sustainable mobility is also pursued at Mercedes-Benz Vans. Since this year, production has already been converted to CO2-neutral production, which is gradually moving closer to the goal of a sustainable transport transition and more effective climate protection. In order to achieve this goal, the company is relying on the use of renewable energies, as well as emission-reducing, new mobility systems on the factory premises, such as the on-demand factory shuttle and driverless transport systems, as well as the purchase of electricity from exclusively renewable sources. These measures are also actively heading towards the goals of Ambition 2039, in which private and commercial vans are to become CO2‑neutral over their entire life cycle. This includes all sub-steps from development to production.