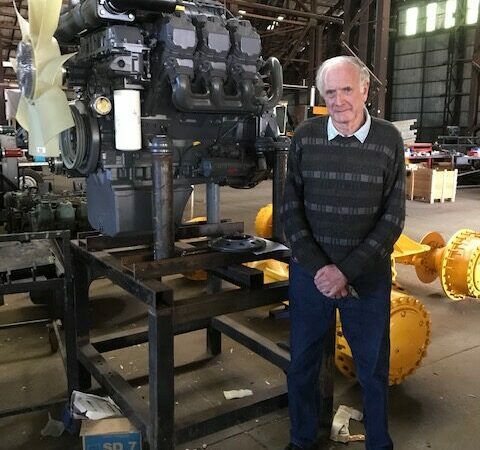 In 1975-76 Western Australian-based Laurie was responsible for developing Acremaster Tractors, which had a reputation for simplicity and reliability.

He has since run Australian-owned Phillbourne, which manufactures quality Australian made agricultural machinery parts in the heart of the WA Wheatbelt.

After hearing farmers talk about how expensive fancy new imported tractors had become, Laurie rose to the challenge and started developing a local version.

When he placed an advertisement in a WA publication in December 2021, he received enquiries from all over Australia. “The response was beyond my wildest dreams,” he says. “I was taking calls from five states within two days.”

The new tractor will be built locally and powered by German-built DEUTZ six- and eight-cylinder 1015 series engines (BF6M1015 C and BF8M1015 C models).

Laurie is modifying a BF6M1015 CP for his prototype tractor and R&D. he hopes the product will be affordable and less complicated to use than others.

The new tractor will use modern technology but operate as simply as possible, minimising complexity when servicing or parts are required.

“The way we made them in the past, if a farmer had a spare screwdriver he could service the tractor,” Laurie says.

Located in Merredin, Laurie’s business, Phillbourne services local and interstate markets. He and his team only use materials and parts that can be purchased and serviced in Australia.

His latest innovation is the Retrodrum, a heavy-duty feed drum that comes complete with all internal components fully welded and assembled.

Retrodrum is fitted to the harvester header, allowing farmers to work faster with fewer blockages and breakdowns.

It grabs crop and pulls them through in a constant and steady flow A smaller barrel with taller flighting creates a huge gap for bulky crops.

DEUTZ Australia BD Manager – Engines Ross Harman says the tractors will be powerful, effective, and affordable. Even better, they are Australian made.

Ross, whose travel was curtailed by COVID-19, hopes to visit Laurie soon. “It would be great if we could sort out the engine scopes and fine tune it in person,” he says.

Laurie appreciates Ross’s efforts. “My relationship with DEUTZ is going really well,” he says. “Ross is doing all that he can to help.”