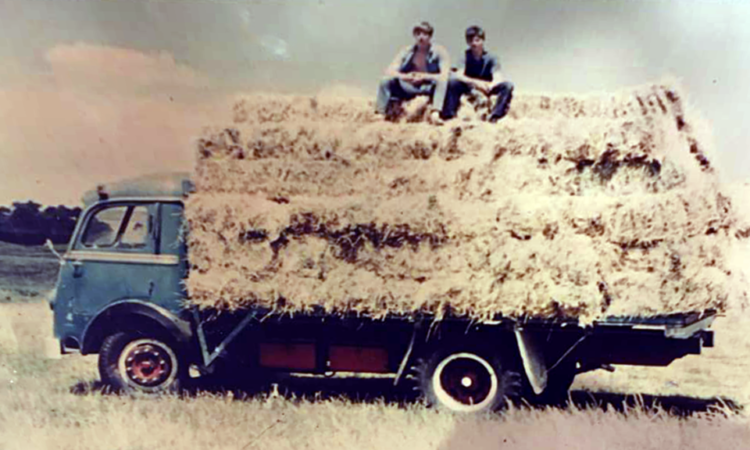 A rare 1950s prototype DEUTZ truck has found a new home after carting hay for many years.

If all goes well the unique vehicle, which features a large DEUTZ logo on the front, will be restored and become a classic car carrier.

The S4500 DEUTZ cab truck with an air-cooled engine was shipped to Melbourne in around 1955.

Classic vehicle enthusiast, Andy Murray, says the truck, which he purchased after finding it in a clearance sale, was probably sent to be tested in Australia’s tough conditions.

He was excited by his find, which he knew was special.

“I love classic cars and the history,” he says. “I collect cars and motor scooters and I have a 1942 tiger moth!”

Andy thinks the prototype DEUTZ truck was originally owned by a wool broking company that was a DEUTZ Australia distributor at some point.

It was used to cart wool and later retired to a rural property in Boneo, on Victoria’s Mornington Peninsula, to cart hay. Andy says it ended up forgotten in a shed until recently.

“This prototype never entered production and was slated for export to Australia, possibly for development and testing,” Andy says.

“From Melbourne, where it was based, it was retired to the company’s rural station at Boneo on the Mornington Peninsula. It was used as a hay carting vehicle.”

Realising the truck’s significance, Andy sold it to classic car collector Mike Nicholas who has plans to turn it into a very unique car carrier.

“I collect rare and unusual cars and trucks and this truck is a one-off. It was built as a cabover truck in 1954 or 1955 but DEUTZ didn’t go into cabover production until the late 1950s or early 1960s,” says Mike.

“I liked the style and have developed the concept of creating a period 1950s car carrier. It’s a perfect truck for carrying a Porsche 356 and it would make a perfect truck to take to car shows. My idea is to make the rear section similar to the car carrier that Mercedes-Benz built for their race cars in the 1950s.”

The Mercedes-Benz high-speed transporter was a one-of-a-kind model built by the Mercedes-Benz testing department. Known as the ‘Blue Wonder’ it had a top speed of 106mph. The original no longer exists but the vehicle was reconstructed using archive documents and now sits in the Mercedes-Benz Museum in Stuttgart.

Mike says the DEUTZ truck is in very good condition. While the paintwork needs to be stripped down and redone, the interior of the cabin is lined with plywood.

“That’s typical of European trucks of that period and it’s very well finished,” he says.

“As a collector you always look for something that nobody else has – the bragging rights! That is very much the case with this truck.”