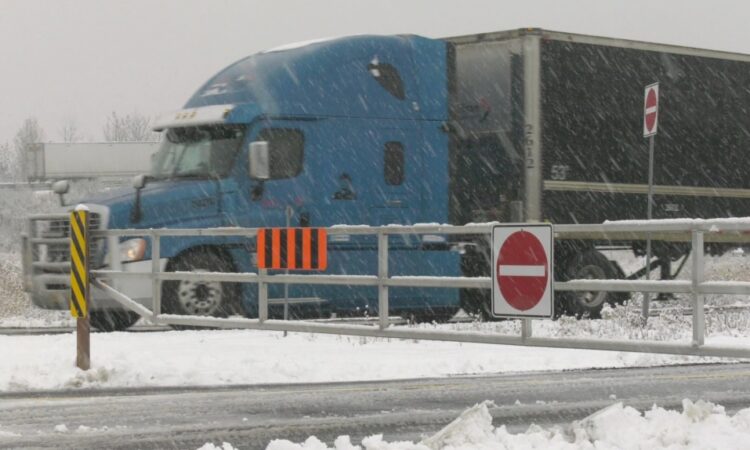 The new dusting of snow caught many off guard on roads across eastern Ontario, causing hazardous driving conditions, minor collisions and closing a major highway for nearly six hours.

Westbound traffic on Highway 401 near Morrisburg was re-routed between Upper Canada Road and Highway 31 on Wednesday, after a collision between a transport and another vehicle.

The highway was closed just after 9 a.m. and reopened just before 4 p.m.

Ontario Provincial Police say they responded to dozens of calls across the region, for vehicles in the ditch between Cornwall and Gananoque, and along Highway 15 in Rideau Lakes Township. Luckily, no injuries were reported.

In the city of Brockville, Public Works Supervisor Yanick Beaudin told CTV News Ottawa they were prepared for the first winter weather of the season.

“Before the snow came we saw the forecast was calling for about 5 centimetres, so we put out our anti-ice truck and we put out brine on all the roads,” Beaudin said, noting the milder temperatures helped melt the snow quickly on city streets.

“Business as usual. This is what we do,” he added. “We prepare for it and, to say easy, it’s not easy, but it is part of our job and we were ready for it.”

Beaudin said it was good to get the plows out on the road before those heavier snowfalls come.

“This is where we test if the equipment is going to work for the season and all the breakdowns expose themselves today, so we’ve been fortunate, no breakdowns,” Beaudin said, reminding residents to drive safely around snow removing equipment.

“Give us some distance,” he said. “They are there trying to protect everybody, trying to ensure public safety. Just give them space, let them do their thing and just take your time.”

Over at Billings Automotive west of Brockville, mechanics were busy mounting snow tires, the phone ringing in the background.

“The phone hasn’t stopped ringing since about 10 to 8 this morning and it’s still ringing as we’re speaking,” owner Mike Dunster said with a laugh.

He noted some drivers were still unprepared for the changing season.

“Had two cars that came in, one went into the ditch, another one just had a little fender bender, nothing crazy,” Dunster said. “But snow tires are obviously the main principle of why that happened, not being prepared.”

“Speed always plays a factor into it, again drive accordingly to the weather and the temperatures that are around us,” he added. “The lower digit numbers are here and they are here to stay, I think. This week’s forecast seems like more snow coming.”

In Morrisburg, the 5 centimetres of snow had residents digging out, and thinking back to last week’s warmer weather.

“I hope it melts! That’s my thoughts,” laughed Norm Stone, taking a break from shovelling.

“Well we gained an extra month or more (of no snow). It’s still not cold, I can’t complain,” he added.

Between 5 and 8 centimetres of snow fell across the region on Wednesday, with more snow expected on Saturday.