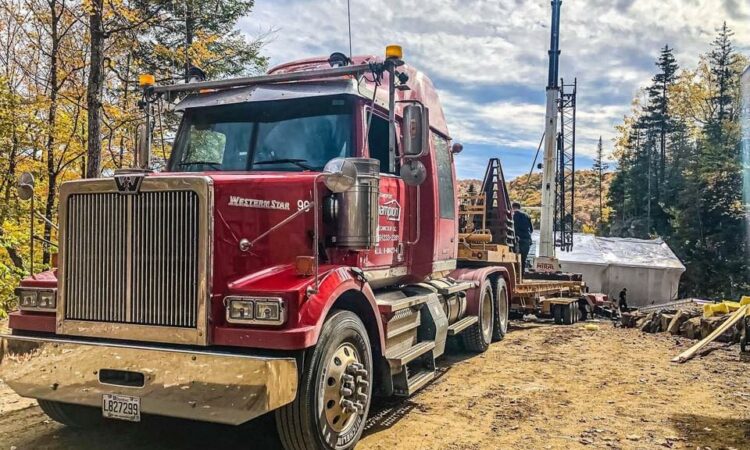 Hauling oversized loads in Ontario can be an administrative nightmare, but a new portal set to be rolled out in January aims to make it easier for fleets to obtain oversize load permits and for municipalities to issue them.

Transport Champion, based on Becancour, Que., near Trois-Rivieres, has about 25 trucks that exclusively haul overdimensional loads throughout Canada. The permitting process in Quebec is relatively easy, with a single permit required for each load, each issued by the province’s ministry of transportation. But travel west to Ontario and it’s a different matter altogether, with not only an Ontario Ministry of Transportation (MTO) permit required for most oversized moves, but separate permits from every county along the route.

The administrative burden this presents wasn’t lost on Benjamin de Haan, director of transportation services with the United Counties of Stormont, Dundas and Glengarry (SDG) in Eastern Ontario.

“We always felt the permitting process for trucking was inefficient for companies and thought we could do it better,” de Haan told TruckNews.com. “Each municipality is its own jurisdiction and there is no way for a trucking company to be very efficient when getting permits when they need to move across Ontario. We recognized that.”

The very existence of permitting agencies in the province points to the complexity of the process.

The Ontario Ministry of Municipal Affairs and Housing funded the development of a portal that will simplify the administrative process for both oversized fleets and municipalities themselves. What began as a small project involving several counties and a variety of permits has evolved into a broader portal that will go live in January. It will initially include 10-11 municipalities in Eastern Ontario, with further expansion planned.

“In a nutshell, the system allows trucking companies to draw their route on an online map based on real-time construction data, closures, and height or width restrictions,” de Haan explained. “Once a company is registered in the online portal, they do not have to re-enter their information for subsequent applications. By drawing their route on the map, the system can recognize and submit the moving permit applications to the appropriate municipal authorities. Under the current regime, the trucking companies moving overdimensional loads must individually apply to each municipality they are passing through, which can be very time consuming and lead to confusion and inadvertent missed permits.”

The familiar Municipal 511 map has been integrated into the portal, allowing users to purchase permits from participating counties through a single transaction. If there are counties along the route that aren’t yet participating, contact information is provided to make it easier for carriers to procure those permits.

It also reduces work on the back end. SDG alone issues more than 640 overdimensional permits per year. Previously, that involved exchanging emails, and having carriers complete fillable forms each time a permit is requested. What used to take the municipality 15 minutes per permit to process now takes five.

“I think it’s even quicker for the people who are applying,” said de Haan. “The feedback we are getting is that it’s very efficient for them.”

Transport Champion is one of the fleets that has been testing the portal. Owner Alexandre Bouvet says his trucks frequently travel into Ontario, hauling modular homes and other oversized loads.

“We have about 10 trucks a week that transport into Ontario,” Bouvet said in an interview. “We order permits all the time.”

He says the process has gotten worse over the past couple of years, with delays from the Ontario Ministry of Transportation. But while the portal won’t help with those, “What our portal will do is show trucking companies where they will need an MTO permit,” de Haan said. “Companies will still have to engage with the MTO to get the appropriate permissions to travel on the King’s Highways. We did try to align our conditions and requirements with what the Ministry asks for to try and make it more seamless between the municipal permit and MTO permit.”

Transport Champion has seen the benefits on the municipal permitting side. One employee spends 40 hours a week chasing down permits and Bouvet sees an opportunity to make her more productive.

“Even if she could save 20 hours of it, it would be awesome,” said Bouvet. “I can ask her to do something else. I still need her, but it would save a lot of frustration.”

When there’s a problem obtaining a single permit, an entire delivery is disrupted, something de Haan hopes the portal will help eliminate.

“Imagine the customer, having a call the day before receiving his house – the dream of his life – saying ‘Sorry, we’re all lined up for you, everything is ready except we don’t have a permit.’ It’s very frustrating for the customer at the end and he’s the one who pays the bills.”

The carrier also suffers, of course. “I don’t have a job for my trucks that day if I don’t have a permit. Everybody loses in that case.”

Bouvet would like to see all Ontario municipalities using the portal. The portal is live on SDG’s website at https://www.sdgcounties.ca/services/transportation/permits. Each municipality that signs onto the platform will have its own link to the portal beginning in January.