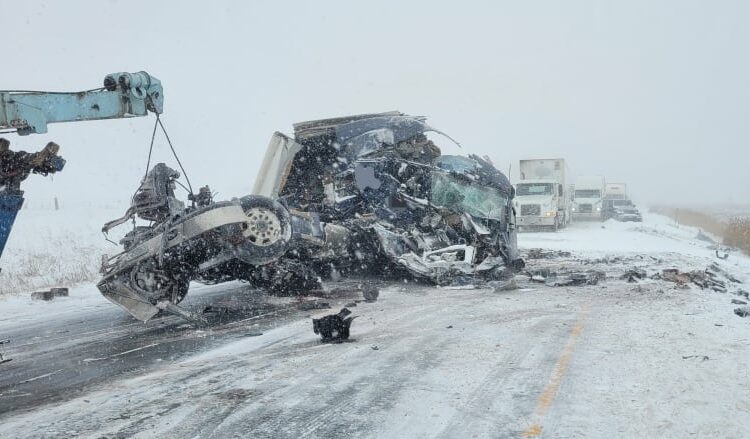 A powerful storm bringing driving snow and lashing winds has forced provincial police to order several highways closed after a hundreds of crashes along Highways 401 and 402 in southwestern Ontario — including a pileup involving up to 60 vehicles on the 402 at Kerwood Road.

Two people were taken to hospital with non-life-threatening injuries, according to a post on the Ontario West Region Twitter account that went up shortly after the crash Friday, as other parts of Ontario and Canada get hit with extreme winter weather.

“Fortunately, no serious injuries have been associated with any of the multi-vehicle collisions along the 401/402 corridor,” the tweet said, accompanied by the image of the gnarled and mangled hulk of a transport truck caught in one of the crashes.

The timing of the storm seemed as diabolical as its ferocity, as bone-chilling winds drove clouds of lake-effect and blowing snow over a large swathe of southwestern Ontario, causing dangerously blinding conditions and forcing millions to rethink travel plans on one of the busiest travel days ahead of Christmas.

The OPP has reported at least three multi-vehicle crashes in the London region since the storm began. They are:

“You don’t want to be caught in this,” said another OPP tweet. “Media officer Cst. Jeff Hare says the 401/402 corridor is one of the worst traffic scenes he’s ever seen. Today is a good day to stay home and stay safe.”

Police have been repeatedly urging drivers not to venture out into the storm, which has only strengthened its icy grip on the region since it began Friday morning, despite the efforts of snow clearing crews.

“You don’t want police showing up at the doors of your loved ones,” said OPP Const. Ed Sandchuck.

A seasoned truck driver told CBC News the region’s weather conditions are among the worst he’s ever seen in terms of the combination of fierce winds and blowing snow.

“It’s crazy. The wind is just unbelievable. It’s like the wind is going to blow the truck off the road,” said trucker Peter Milan, who spoke to the CBC while on a delivery in downtown London.

“You have to keep fighting and focus on the road. It’s not safe. If I hadn’t been working, I would have stayed home.”