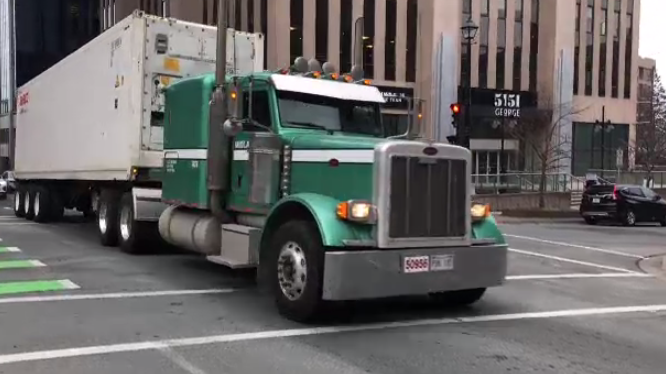 Trucks and buses that travel between Canada’s provinces and territories will be required by Jan. 1 to be equipped with electronic devices that log the number of hours drivers spend on the road.

Ottawa changed federal regulations to require electronic logging in 2019 and ordered provinces and territories to comply with the change by mid-June of 2021, then extended the deadline to the end of 2022. The electronic devices are to replace paper log books, a move officials say is safer and more efficient in preventing drivers from being on the road for dangerous stretches of time.

Nova Scotia, New Brunswick and Newfoundland and Labrador are among several jurisdictions that have indicated they will enforce the rule starting Jan. 1.

In Nova Scotia, drivers who travel within the province or within a 160-kilometre radius from their base will not be required to install one of the more than 55 types of certified electronic logging devices. Drivers who cross provincial boundaries, however, will have to comply with the new rule.

Nova Scotia says that Canadian truckers and bus drivers have been required since 2019 to use the devices when travelling in the United States.

Chris McKee, executive director of the Atlantic Provinces Trucking Association, said in a recent interview that the majority of his organization’s 320 members are ready for the change.

“This is not new to the industry. I would say the good majority of our members are already using electronic logging devices,” McKee said. “But essentially the time has come and our fleet owners and individual owner-operators need to comply.”

McKee said that while the new rules modify how driving data is collected, not much else will change for truck and bus operators.

“It’s a much more efficient way for drivers to record their driving times,” he said. “It will help them be as accurate as possible, and it makes it easier and faster to track. It beefs up the rules around hours of service.”

Currently, long-haul drivers can only remain at the wheel for a maximum of 13 hours during a 24-hour period and must have a minimum of 10 hours of off-duty rest, McKee said, adding that they can’t log more than 70 hours of driving time within a seven-day period.

Maritime Bus owner Mike Cassidy said his regional interprovincial service has been using electronic logging devices on its fleet of more than 100 passenger coaches for about the last three years. “It was something we knew we had to comply with so we adopted this a while ago.”

He said each of his company’s buses uses a device that’s activated when the vehicle is turned on, adding that the equipment tracks such things as driving and idling times, speed and instances when drivers need to quickly apply the brakes — known as “hard braking.”

“With the electronic system it’s the ease of (collecting) data,” Cassidy said. “The manual log book system was subject to error, whether intentional or unintentional.”

Under the rules, work shifts for bus drivers can be no longer than 16 hours in a day, including 13 hours at the wheel, two hours of rest and an hour for other duties such as bus inspections. Drivers then have to be off duty for a full eight hours before returning to work.

Cassidy said the length of a shift is determined by a driver’s route, adding that shifts are often less than 16 hours. Overall, he said, the move to electronic logging has helped Maritime Bus in its operations.

“The management of driver and equipment performance has made us more efficient,” Cassidy said.