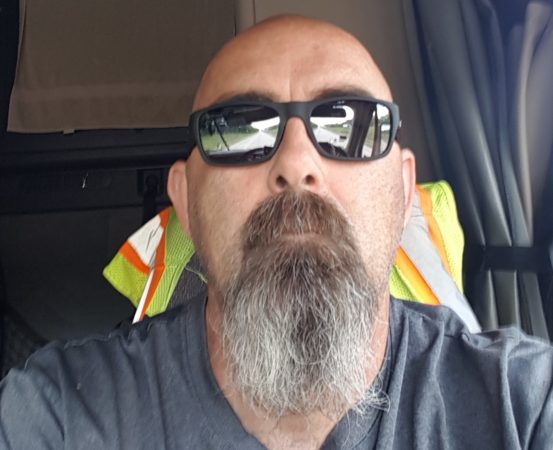 PICKERING, Ont. – Shandex Truck driver Dave Legge always heads out the door with a five-day supply of food in the sleeper. There are the frozen meals prepared at home. The coffee and tea. The case of Mr. Noodles.

“I’m ‘self-isolated’ in the truck. Always have been,” he says, using a phrase that’s become commonplace in the days of a pandemic. “I don’t use restaurants that often.”

“I’m right on my hand sanitizer every time.”

But those supplies always need to be replenished on the sixth day of a trip, and last week that occurred during a run between York and Greenville, Pa.

Normally it wouldn’t be a problem. This time, however, he was rolling through the area just as the Pennsylvania Department of Transportation closed rest areas on March 17, responding to Covid-19 concerns.

“They shut down all the rest areas along the tollways. You couldn’t get in the building,” Legge says, recalling the unwelcome surprise as he traveled to pick up a load of tin. “The day before, they said they were shutting the rest areas down … I didn’t realize they were going to shut all the food places down.”

The decision to close the rest areas was quickly condemned by trucking industry groups as diverse as the American Trucking Associations (ATA) and Owner-Operator Independent Drivers Association (OOIDA).

“Commercial drivers have temporary relief from hours of service regulations, but they must manage fatigue as the respond to this emergency, and rest stops are an irreplaceable component, along with commercial truck stops,” ATA president Chris Spear wrote in a letter to U.S. President Donald Trump.

OOIDA president Todd Spencer wrote the DOT officials, saying the closures “demonstrate a lack of understanding of truckers’ needs and a worrisome disregard for their personal safety among states.”

Indoor facilities were re-opened at 23 of the Pennsylvania rest areas on March 24. Thirteen had reopened March 18 with portable restrooms and handwashing facilities.

But there’s a difference between a porta potty and a permanent restroom with proper sinks and running water, Legge says. “Porta potties on their best day …”

It’s not the only barrier he’s faced in the search for washrooms, of course. Like many truckers, the Ontario driver has encountered several locked doors as workplaces create barriers in the fight against Covid-19 – and not just at the locations that ban access to washrooms on a typical day.

When he arrived with another load in Tennessee, at a location where he usually walks in with his bill of lading and uses the washroom, he was greeted with a note on the door, instructing him to call a number. The documents had to be emailed this time.

“And I was told I was not to use the washroom,” he says. “I was upset. I said, ‘the dirty old truck driver is not allowed.’”

As he sat in his truck, Legge watched two local drivers enter and exit with no problem. Four painters working on the site walked in and out. People arriving in a handful of cars did the same thing.

He trekked across a creek to use the port a potty at a car dealership next door.

Other doors remain open, though, and there’s less traffic on the road as well. He’s also happy to have steady work as Covid-19 wreaks havoc on the economy.

“I’m quite frankly happy to be working,” he says. “It’s still the same job.”

In the meantime, he adds one extra step to his routine when he climbs behind the wheel of the 2017 Freightliner Cascadia.

“I’m right on my hand sanitizer every time.”