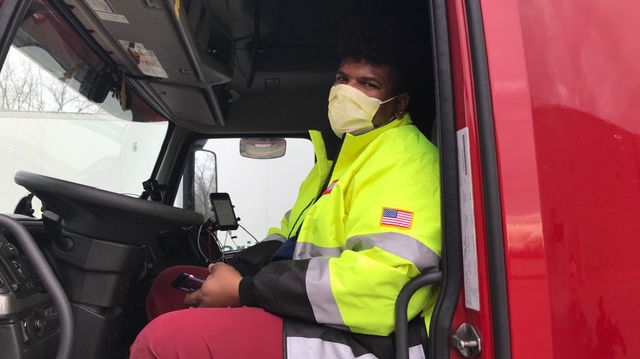 ELGIN COUNTY, ONT. — At the ONroute location between Dutton and West Lorne, Ont. there is a common response from transport operators.

“I try not interact with anyone.”

That’s the statement nearly all Canadian and U.S. drivers told CTV News at the rest stops located about 40 kilometres southwest of London, Ont.

Transport drivers are under enormous pressure to keep the supply lines going, as North America copes with the COVID-19 pandemic.

At greatest risk are those who cross the Canada-U.S. border, which is currently closed to all but essential traffic.

Jordan Jeffreys of Illinois takes pride in hauling grocery supplies into Canada. As CTV News approached him for an interview, we noted he was one – of only a few – drivers wearing a mask.

“It protects me from the droplets of others,” he maintains.

Jeffreys’ acknowledges cases of COVID-19 in the U.S. are rising faster than in Canada.

Still, he says his family worries about him being out on the road, in multiple locations.

“Yeah they kind of do, with me being out here. Most other people get to stay at home.”

Driver Joe Agresta, of Cornwall, Ont. worries quite often about his teammates crossing into the U.S.

With seniority, he only travels the 400 series highways, unlike a good friend. Agresta says the friend has chosen to not see his wife, for safety, when returns from long-haul treks south of the border.

“He’s out there on the road now. He stays in the truck and he doesn’t go home and visit her, just to keep everybody safe.”

On the plus side, drivers say their spirts are heightened by the growing public appreciation of what they do, and what they are risking.

On Wednesday, ONroute locations – one of the few places transport operators can still find open public bathrooms – will be providing all drivers free coffee as a thank you.

For Agresta it’s another reason to keep going.

“People are saying thank you to me when I drop in to an ONroute on the 401 for coffee. They’re asking me how am I feeling, and they are thanking me every day or just asking what I’m doing.”

Another driver, Davinder Singh, echoed the public appreciation but added, “Somebody has to do it (trucking). If everybody stops doing it, it wouldn’t be good, somebody has to get the food.”