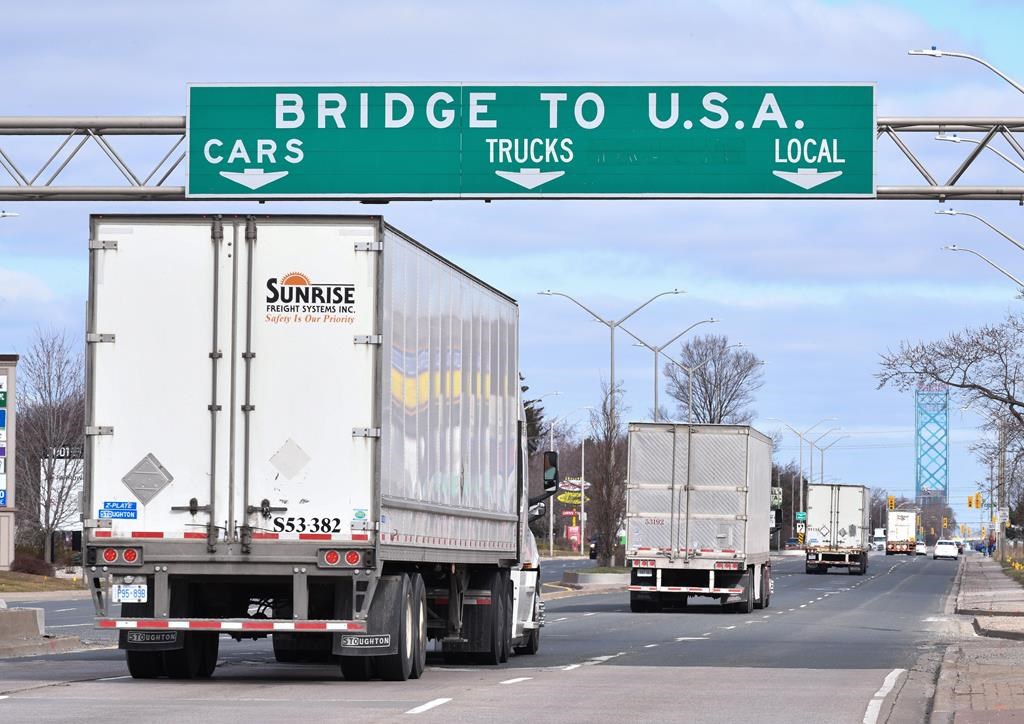 Officials on both sides of the border are expressing alarm and shock that a provision allowing certain hazardous materials on the Ambassador Bridge has been “snuck” into a COVID-19 relief bill recently passed in the Michigan state senate.

“Having flammable, combustible and corrosive materials on a 91-year-old bridge that doesn’t have containment leaves us incredibly vulnerable for spills and explosions and burning situations,” MP Brian Masse (NDP — Windsor West) said Wednesday after writing to federal Transport Minister Marc Garneau to express his concern.

The issue is simply that important, he told the Star, adding that copies were sent to several other ministers as well as Prime Minister Justin Trudeau. Hazmat trucks have not been allowed on the bridge for many years because the bridge doesn’t have the safety features found on more modern bridges, like fire suppression and spill containment systems.

“If something were to happen, it directly exposes the immediate communities, including the University of Windsor which is adjacent to (the bridge),” Masse said.

In addition to the public safety and environmental concerns associated with chemicals spilling into the river, a hazmat calamity on the bridge could cause an economic disaster, he said. Shutting down North America’s busiest border crossing for a prolonged period (weeks or even months) could cripple the local auto industry and the transport of essential goods during the pandemic, Masse said.

Currently, hazmat trucks use the Detroit-Windsor Truck Ferry or cross the Bluewater Bridge in Sarnia. In four years, when the new Gordie Howe International Bridge opens, it will be equipped and designed to handle hazmat trucks.

The Ambassador Bridge has been trying for years to get some relief from the Michigan ban and renewed its efforts starting in May. Just two months ago, Windsor city council unanimously opposed the bridge’s bid, as did the Windsor Fire and Rescue Service, joining a long list of opponents in Michigan.

The move to include the provision in the COVID bill in Michigan “shows the immense tentacles of the Ambassador Bridge in lobbying politics, there’s no doubt,” Masse said, suggesting that if Michigan allows this, the Government of Canada must step up with its own hazmat regulations for the bridge.

“This is an incredible public safety issue but also an economic issue that shouldn’t be underestimated in terms of its impact,” he said. For this provision to be passed like this “undermines not only the safety of the border, but also to some degree the relationship between our two countries handling hazardous and dangerous materials going back and forth.”

“A lot of really good things for COVID, but they snuck this in,” she said Wednesday. “We got hazard pay, we got money for our departments to get the vaccine out, we got payments to restaurant workers to help them through this pandemic,” she said.

“There are all these things in there and, all of a sudden, hazardous materials on the bridge. It has nothing to do with the rest of the bill.”

“I think they saw an opportunity with COVID relief, in a bill that was being done in lame duck in a last-minute effort.”

In a commentary in the Detroit Free Press Monday, Chang said the Ambassador Bridge provision ignores facts and the concerns in her community, and relies on a 2012 draft study that was rejected the last time the state ultimately decided against allowing hazmat trucks on the “antiquated” bridge in 2014.

“Allowing these types of hazardous materials to be transported across the Ambassador Bridge — a bridge that is over 90 years old, not up to the same level of inspections, traffic safety features, spill containment, or fire suppression systems needed to protect my residents’ safety — is downright dangerous,” Chang wrote.

“Our state has a responsibility to protect its residents from harm. It is shameful that legislative Republicans included this boilerplate language that has absolutely nothing to do with COVID-19 relief.”

The bill still must be signed by Democratic Gov. Gretchen Whitmer. An email to her office Wednesday was not returned. Chang explained that Whitmer doesn’t want to veto a COVID relief bill, so her legal people are trying to find a way to just nullify the hazardous materials provision.

Attempts to reach representatives of the Ambassador Bridge and Transport Canada were also not successful on Wednesday.

For an illustration of the dangers of allowing hazardous materials on the bridge, truck ferry owner Gregg Ward pointed to a Nov. 11 hazmat truck collision and fire that shut down the Brent Spence Bridge between Kentucky and Ohio for 41 days. Such a shutdown on the Ambassador Bridge would mean a virtual shutdown of cross-border truck traffic, he said.

“The economic consequences and the resulting impact on people’s lives is potentially catastrophic,” said Ward.

“And accidents happen all the time.”