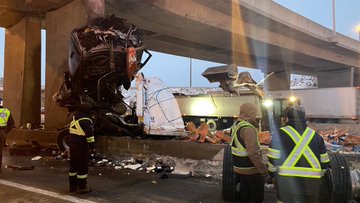 A truck driver is in hospital with critical injuries and police say a stretch of Highway 401’s eastbound express lanes in Toronto will likely be closed through the morning rush hour after an unusual crash early Tuesday.

Emergency crews were called to the collision on HIghway 401 eastbound, near the Allen Road exit, at around 1:20 a.m.

A transport truck was stopped on the right shoulder of the express lanes when another tractor trailer approached from behind it, police say.

The approaching truck then struck a barrier, causing the front-end of the cab to slam into an abutment of an overhead bridge. Once it came to rest, the driver was trapped in the cab nearly two storeys above road level.

“It was quite a challenge to get him out, due to the severity of damage,” said OPP Sgt. Tim Dunnah from the scene.

The driver was taken to Sunnybrook Hospital in critical condition, he added. No one else was injured.

The crash left debris strewn across the highway. The eastbound express lanes in the area of Allen Road are expected to be closed until about noon for an investigation and clean up.