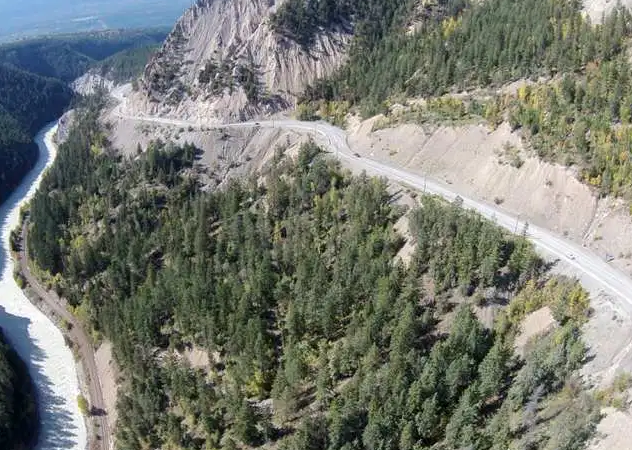 The Trans-Canada Highway will be closed for five weeks straight during the spring at Kicking Horse Canyon, where the highway is being widened.

The closure east of Golden will last from April 12 to May 14, and drivers can take an hour-and-a-half detour using Highways 93 and 95, between Golden and Castle Junction.

“This closure will allow crews to proceed with work that cannot be carried out safely during shorter interruptions, such as major excavation, piling and hauling,” a notice from the Ministry of Transportation says.

The province says the highway will be opened twice daily for local traffic, with a pilot car guiding traffic at 7:30 a.m. and 4:30 p.m. It says exceptions will be made when needed to allow school busses and emergency vehicles through the closure.

The route is the main east-to-west connection in between B.C. and Alberta for commuters and for commercial vehicles.

“The project engineer and the Ministry (of Transportation) made a number of months ago. And they’ve been very active and very open, working with us to try and come up with mitigation and strategies to figure out what we can do with this. The cold truth is the work needs to happen. And we’re pleased with the infrastructure improvements that this will bring,” he says.

“A number of companies have had to make changes and work with their customers, and give them a notice that we will be utilizing switch points and changing delivery cycles. And now that we have dates, we’ll be able to work even more closely with those customers.”

And Earle says the province and engineers are making minor upgrades to Highways 93 and 95 to make sure the detour route can handle increased truck traffic in the short term.

“For example, making sure roundabouts that are in place are sufficiently wide and constructed as such so that you can get larger equipment through. And it looks like it’s going to be okay. I say okay, not ideal; it’s not the size and route that Highway 1 is obviously.”

The multi-year project to widen 4.8 kilometres of Highway 1 at Kicking Horse Canyon is worth $601 million.