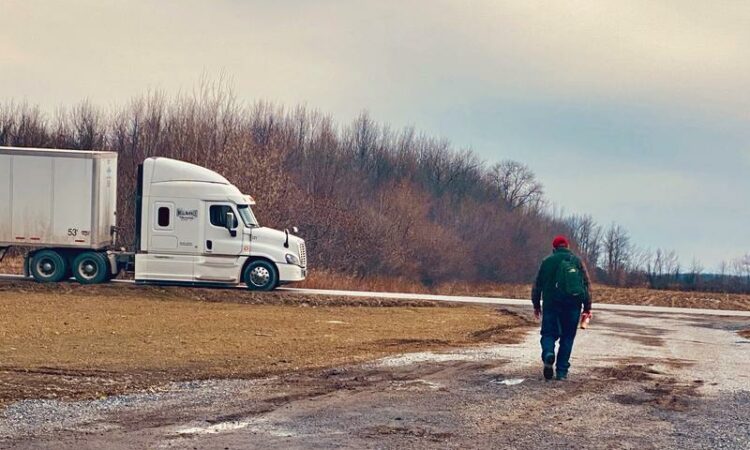 The border between the U.S. and Canada has been closed to most traffic for more than 10 months due to the coronavirus pandemic, but there is one group of people who have continued to cross it regularly throughout that time: truck drivers.

On an average day, about 30,000 trucks roll across the U.S.-Canada border, carrying more than $1 billion in trade.

Shawn Dumas drives an 18-wheeler for Bellavance Trucking. Dumas, who is 33 and lives in Swanton, hauls a wide variety of things such as recycled materials, chocolate and technology products across the Northeast. Additionally, three to four times per week he drives his big rig over the U.S.-Canada border, which sometimes makes for 12-hour days.

Dumas, who used to be a dairy farmer, says he’s “not scared” of working long days, but he says things were a little strange during those first weeks of the pandemic right after the border closed.

VPR’s Henry Epp spoke with truck driver Shawn Dumas. Their interview is below and has been edited and condensed for clarity.

Shawn Dumas: The first month and a half, two months, was ominous. Not having any cars, it was just trucks, and it was smooth going through, to be honest. It was a smooth transition for all truckers going through.

Henry Epp: Like it went a lot faster than it normally would?

Correct. You didn’t have to mingle your way around any kind of cars that were blocking the port of entry for trucks. There was no cars.

So that was the first couple of months. How has it changed over time since then?

And I mean, I’ve been crossing the border since I was a child — from playing hockey or just visiting relatives or going to places up in Montreal or other parts of Quebec — I’ve never seen, it’s almost like a military presence trying to cross into Canada. They’re checking our citizens during COVID, they’re having us get out of our trucks, at certain points rummaging through our vehicles.

And I understand they have a right to do that, but pre- pandemic or days that we’re not so pleasant, they weren’t there doing that. They would show certain days that they wanted to be outside checking only freight trucks going north.

So, extra scrutiny from the border officials. I mean, it sounds like that was kind of surprising.

It was. I’ve never experienced such a thing. So I’m not quite sure why they were doing it. I think it’s more that they didn’t have anything to do.

In terms of the pandemic response, are they asking you about exposure to COVID-19, anything like that when you cross?

Especially Canada, northbound, asks almost every single time. Southbound, not as much, coming back into the States. At first, the first few months of the pandemic, they asked every single time when I was crossing. Now, that it spread across the globe, the U.S. side’s not asking as much.

So, back around Christmas, there was this situation, I don’t know if you saw this at all, in southern England, where at one point as many as 6,000 trucks were all stuck waiting to go over to the border to France, when France had abruptly closed its borders due to the new variant of the coronavirus that was coming out in Britain.

I’m wondering if you prepare for anything like that, potentially getting stuck on either side of the border during this time when things are different than they used to be?

I was actually in Ontario when my girlfriend called and said that [Canadian Prime Minister Justin] Trudeau and [former U.S. President Donald] Trump are going to be closing the borders. And I was actually in Ontario that day that that was happening. And I was like, well, I don’t know what this is going to mean for me. Like majority of my days, I’m in Canada, you know. I don’t know how I’m going to go back and forth, and are my hours are going to be cut, and I’m not going to have a position anymore?

When that first happened, that the borders were going to be closed, I was pretty pessimistic what was going to happen. But I don’t foresee any way possible that the freight moving between the United States and Canada could be slowed down. I mean, it would haul our economy to the ground.

Especially, you know, thinking back to early in the pandemic, I remember seeing a lot of signs around Vermont thanking truckers specifically as essential workers. And this was at a point, you know, when people were much more in their homes and there were shortages at grocery stores, hoarding going on, concerns about supply chains. Do you feel like you’re still treated as an essential worker now that we’re almost a year into the pandemic?

I look at myself as just a part of the machine that keeps North America going, is how I look. I know I’m essential, I play an essential role, but the real essential people, the people in health care, those are the men and women that are the ones who take your hat off to. I just play a small part in moving freight around.

Well, Shawn, you know, you’ve gotten used to this situation where you’re kind of the only one going over the border. What do you think it will feel like when people are allowed to cross with you again over the U.S.- Canada border?

I’m really hoping that they can soon, because I have friends that their significant others and their families haven’t been able to embrace in what, we’re at nine, 10 months now, right?