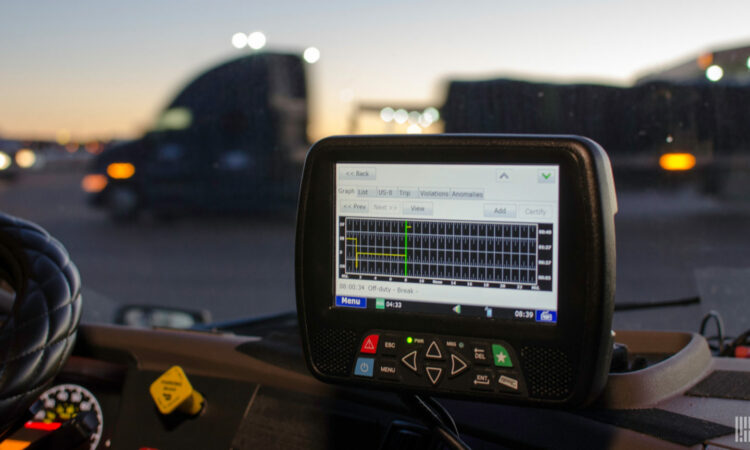 No devices certified yet as government takes slow road to implementation

Canada took a slower road than the United States to implementing its electronic logging device (ELD) mandate for commercial vehicles. In doing so, it added teeth: a requirement that ELDs undergo certification by a third party accredited by the government.

When the Canadian ELD mandate takes effect on June 12, it won’t have any immediate bite. Initial enforcement measures, according to the Canadian government, will consist of “education and awareness.” The mandate approaches as no ELD has been certified for use under the Canadian rule.

Transport Minister Omar Alghabra announced the soft rollout of enforcement last Tuesday. He did not explain why the government is taking that route but highlighted the challenges facing the industry during the COVID-19 pandemic.

“This will give sufficient time for the industry to obtain and install certified electronic logging devices without penalty as of June 12, 2021,” Sau Sau Liu, a spokesperson for Alghabra’s ministry, Transport Canada, which is overseeing the rollout, told FreightWaves in an email.

Liu declined, however, to provide specifics about when enforcement would begin to include penalties.

“Additional information on progressive enforcement will be made available in the coming months,” Liu wrote.

Full enforcement didn’t come immediately in the case of the U.S. mandate either. It came two years later, in 2019, when trucks using the legacy automatic onboard recording devices (AOBRD) had to make the switch.

The Canadian ELD mandate, unveiled in 2019, was designed to have a lot in common with the U.S. rule. The majority of Canadian trucking companies do cross-border operations into the U.S. and have already had to use ELDs as a result.

The Canadian rule has been complicated by the fact that each province has also had to adopt individual mandates. While Canada’s provinces and territories have adopted ELD rules in harmony with the federal mandate, it hasn’t been without kinks. Quebec won’t be enforcing its mandate, initially.

The Canadian regulation’s requirement of third-party certification is the single most important difference. In contrast to the U.S., where manufacturers self-certify, devices that will be approved in Canada must undergo a vetting process at the manufacturer’s expense to ensure they conform to the detailed technical requirements.

A company contracted by the government, FPInnovations, has begun certifying ELDs, according to Transport Canada. Transport Canada and the company declined to provide details about when the certifications will be completed.

“While no device is certified as yet, given the safety benefits of ELDs, it will be important for the industry to equip their commercial vehicles with the devices as soon as reasonably possible,” Liu wrote.

U.S. trucks going to Canada will need a certified ELD

Canadian officials envisaged that the mandate and certification process would not mean that a separate ELD would need to be used for Canada. Existing ELDs, including those currently used in cross-border operations, can continue to be used once their software is updated after they are successfully certified.

ELDs are already in widespread use among Canadian fleets and owner-operators on account of the U.S. mandate and the prevalence of cross-border trucking operations. The rule also applies to any U.S. trucks entering Canada. They around accounted for less than 20% of all cross-border truck traffic in 2020, according to Statistics Canada data.

But whether any given device used today will get approved for the Canadian mandate is another question.

The additional certification requirement was intended, in part, to make it harder for carriers and drivers to circumvent hours-of-service rules by ensuring that the ELDs themselves can’t be tampered with as easily.

Earlier this month, KeepTruckin told FreightWaves it expects its ELD to be certified for use in Canada. KeepTruckin is fighting an effort by the National Transportation Safety Board (NTSB) in the U.S. to have its devices decertified following an investigation that revealed electronic log falsification. KeepTruckin has asserted the agency has mischaracterized its ELDs.

Industry groups in Canada pushed hard for the third-party certification requirement in response to concerns about some U.S. ELDs.

“There are devices on the market that will allow you to manipulate your HOS far too easily,” said Steve Laskowski, president of the Canadian Trucking Alliance (CTA), which represents thousands of carriers across the country. “If these kinds of devices become prevalent, we maybe would have created a far worse situation than with paper logs.”

The CTA has welcomed the arrival of the mandate, but Laskowski acknowledged that its members would have preferred to have full enforcement begin immediately.