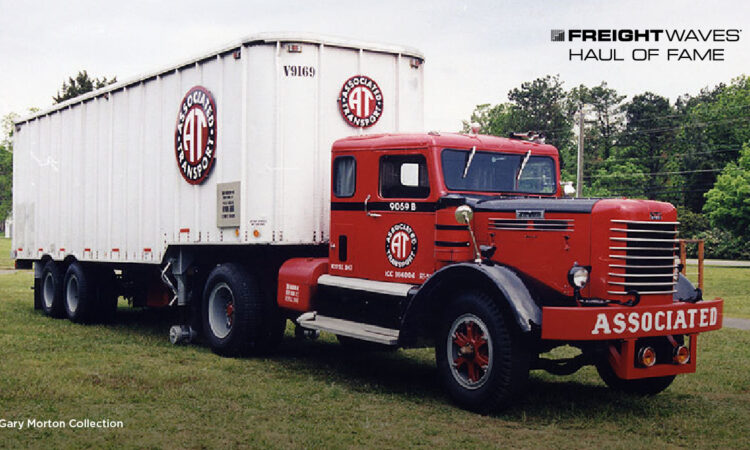 A huge merger – particularly at that time

Following the merger, Associated Transport operated 3,500 vehicles over 24,00 miles of unduplicated routes from Canada to the Gulf of Mexico, and as far west as Cleveland. The newly formed company “inherited” 117 terminals from its predecessor companies. To consolidate operations, Associated Transport management cut the number of terminals to 72, recognizing that continuing to operate 117 terminals would cause the company to hemorrhage money even if it generated significant revenues. Their thinking was on target, and in its first year of business, Associated Transport reported revenues of over $22.7 million, but still generated a net loss of nearly $1.25 million.

At one point, the mammoth trucking company employed over 7,200 people. Seven hundred of these were located at the Burlington, North Carolina terminal, which formerly had been owned by Barnwell Brothers. Associated Transport trucks were often seen carrying textiles and tobacco, though they hauled other commodities as well.

The company scaled back its operations even further and over the next five years further reduced its number of terminals. Efforts to consolidate were complicated further by competition with railroads. At that time, the company’s routes were more expensive than similar railroad routes.

This, in conjunction with difficulties combining seven companies into one cohesive unit, led to financial distress for several years. In 1944, Associated Transport reported revenues of $19.2 million, but recorded a loss of more than $425,000. In 1945, the company reported a loss of nearly $600,000 on revenues of nearly $18 million.

By 1947, however, the company began to gain ground. Its rates were competitive with the railroads after it made cuts in staff wages. Associated Transport management had also made tough decisions regarding its terminal network. The number of terminals was cut to just 38 in Georgia, Massachusetts, New Jersey, New York, North Carolina, Ohio, Pennsylvania, South Carolina, Tennessee, Virginia and Washington, D.C. Associated Transport’s difficulties were not over, however; its equipment had worn out servicing the war effort, and it had to take out loans to replace its trucks.

At that time Associated Transport was headquartered in New York City. The company was profitable throughout the 1950s and 1960s. In 1955, the company moved to a brand-new headquarters in Rochester, New York. It continued to reorganize in order to operate more efficiently, and in 1969, it had grown to 80 station offices. However, the company had consolidated further; it had just 21 terminals in a six-state area.

It was not all good news, however. In 1969, Associated Transport was charged with over 5,000 safety violations (covering the previous three years) by the Federal Highway Administration. The company also faced continuous labor problems with the International Brotherhood of Teamsters in several of its terminals throughout the 1950s and 1960s.