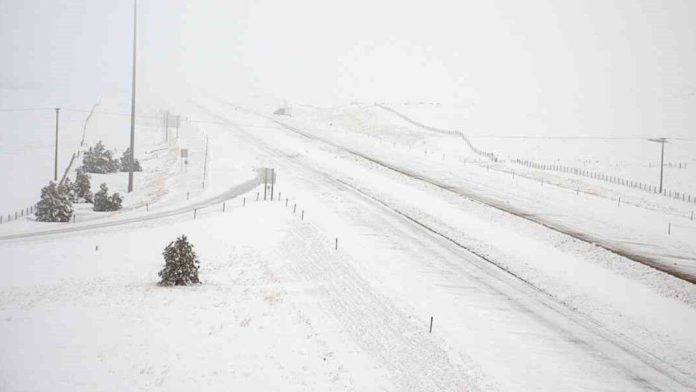 A portion of Interstate 80 is still closed Tuesday afternoon as Wyoming works to clear the snowed-in roadways, leaving some truckers stranded in Nebraska.

A record-setting snowstorm blew through Wyoming, Nebraska, and Colorado over the weekend, forcing the closure of westbound I-80 in Sidney, Nebraska at 9 p.m. on Saturday. By Monday afternoon, that closure had extended another 270 miles east to Grand Island.

On Monday evening, westbound I-80 opened through the I-80 split with Interstate 76. However, as of Tuesday afternoon, westbound I-80 travel into Wyoming will remain closed until the state can remove the 3 to 4 foot snow drifts still covering the roadways, reported The Omaha World Herald.

“These drifts are heavy and hard to move and continue to be impacted by blowing snow,” reported the Wyoming Department of Transportation.

Because of these extended closures, many truckers found themselves stranded in Nebraska, and the hospitality they encountered spans from charitable to downright inconsiderate.

More than 650 semi trucks reportedly pulled into the Flying J in Big Springs, leaving many others to park along side roads and even in the gravel lot of the  Viaero Center arena.

“This parking lot is flat full. … We have a lot of agitated truckers; they’re ready to go,” said Drew Small, a lead cashier at the packed Flying J.

“Ladies driving around and handing out these to stranded drivers,” shared one CDLLife App member who was gifted water, snacks, and an orange by some recruiters apparently capitalizing on the drivers’ situations.

“Ladies aka. Recruiters,” commented one member.

“Probably more than lots of folks’ companies are doing,” added another.

How long will it be until we can get back on the road?” lamented stranded driver Peter Pausa, who was on his way to Canada with a load of ice cream.

“Somebody told us we can’t use the washroom inside the arena. Well, that’s no good. We have to go sooner or later.”

As of 3:30 p.m., I 80 in the Nebraska panhandle remained closed to allow for Wyoming DOT to clear the highways. There is no estimated time of reopening.