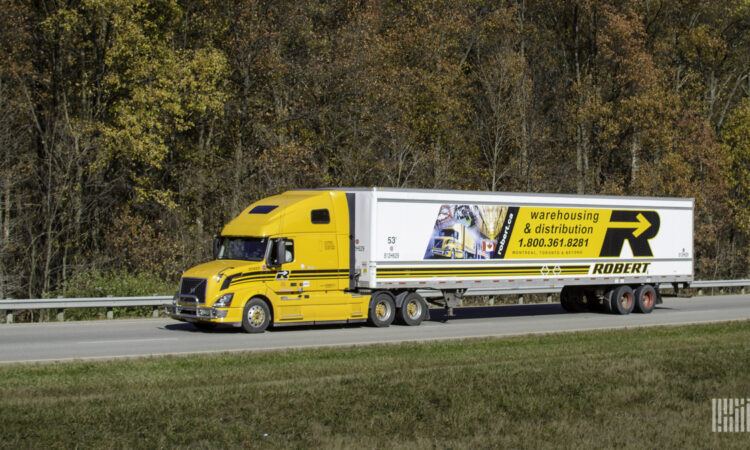 ‘Pallets won’t be touched by a human before going into the tower,’ Groupe Robert CEO says of CA$150 million facility

Imagine a distribution center that only requires the push of a button and waiting a few minutes to unload a truck. Then, a conveyor belt automatically moves pallets into a cold storage tower with no human interaction.

An automated distribution center with these features and capacity for 60,000 pallets of fresh and frozen foods is coming to Varennes, Quebec, in early 2023.

Groupe Robert, one of Canada’s largest trucking and logistics companies, is investing CA$150 million ($120 million) in just such a facility, adding to the company’s existing 3.5 million square feet of warehousing space.

Groupe Robert started as a family trucking company in 1946. Now, it has 1,400 tractors and provides customers with less-than-truckload, truckload, distribution centers and specialized transportation services.

This project will expand Groupe Robert’s reach into the food and cold storage sector. The company’s fresh and frozen business is growing steadily at 2.5% to 3% per year, Michel Robert, president and CEO at Groupe Robert, said in an interview with FreightWaves.

“Every year, [grocery stores] replace the traditional cans with ready-to-eat, ready-to-cook, already prepared meals both in fresh and frozen, so we feel the industry will continue to grow for many many years to come,” Robert said.

The state-of-the-art distribution center will be designed with local food systems, automation and sustainability in mind. With a height of 150 feet, the distribution center investment includes CA$40 million in financial support from the Fonds de solidarité FTQ and a CA$15 million loan from the government of Quebec.

For regional customers, drivers will take specialized trucks to nearby warehouses to retrieve pallets, haul them back to the center, hook trailers up to docks, and press a button that will initiate an automatic unloading process. It should only take a few minutes for pallets to be unloaded and travel on a conveyor belt into the cold tower where they will be stored. Robert said this level of automation means that doors will automatically open and close as pallets approach the entrance, minimizing wasted energy.

“These pallets won’t be touched by a human before going into the tower,” Robert said.

However, he added that there will be a manual forklift and conveyor process for outside carriers. Those pallets will need to be scaled and measured for height and balance before being automatically transported to the cold storage room.

Robert said the second and third levels of the building will be used for added value activities such as order case picking, unit picking, layer picking and co-packing.

The center will be in compliance with sustainable development standards, featuring solar panels and a rainwater collection system, a Monday release said. The energy and water captured will be allocated for washing trailers.

The company plans to collect heat released from refrigeration equipment to warm office space and melt ice and snow on cement outside the center, Robert said. He said Groupe Robert is also in discussions with neighbors to potentially sell them excess heat in the winter.

This distribution center will use carbon dioxide for cooling instead of other common refrigerants such as ammonia. Using carbon dioxide is more environmentally friendly and eliminates the risk of ammonia contamination, Robert said. After being equipped with a low-oxygen system, the building will have a very low risk of fire as well, he added.

At the beginning of the COVID-19 pandemic, Robert said, governments encouraged everyone to buy local products. He said this automated distribution center will likely be “very attractive” for people who promote buying locally produced food. With capacity to store 30,000 pallets of fresh and 30,000 pallets of frozen products, Robert said the company expects Quebec producers to use about 60% of the space, the rest of Canada to use about 20% and international producers to use the remaining 20%.

“The COVID-19 pandemic made us realize the importance of consolidating local supply chains in order to ensure the delivery of products throughout Quebec. By automating its new distribution and warehousing centre, Groupe Robert consolidates its leadership position in the logistics sector,” Lucie Lecours, minister for the economy, said in a statement.

Robert said COVID-19 accelerated the automation project as it has in many warehouses and distribution centers worldwide. When the pandemic began, Robert reflected that he had food customers calling him daily to ensure that Groupe Robert would have the workforce necessary to meet their needs. Customers were worried that workers would get sick, and the labor to support the work wouldn’t be available.

Because automated labor is more readily available, Groupe Robert looks forward to being able to guarantee it can meet customer needs up to 10 years in advance. Right now, he said, “I can only commit to the next two to three years” because the labor availability in the area is not reliable enough to predict further in the future. According to Robert, it can be difficult to recruit people to work in freezing temperatures around minus 18 degrees Celsius (0 degrees Fahrenheit).

While automating parts of the distribution center processes is likely to result in savings, Robert said the company cannot guarantee there will be cost savings for customers at this point due to the high investment cost. He said the company is more geared toward long-term savings.

“Our goal is to give a perfect order rate to our customers,” Robert said. The automated process and reliance on computers will limit human error and inefficiencies.