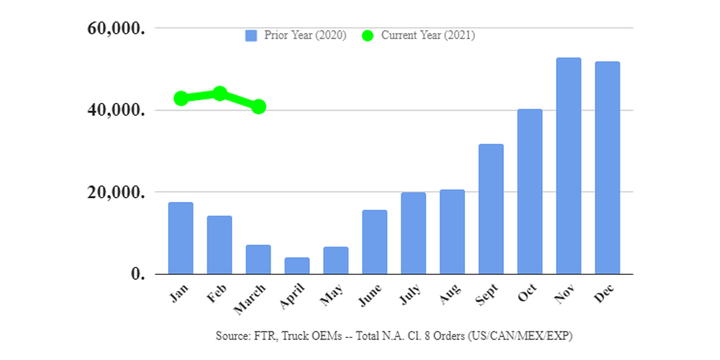 Preliminary North American Class 8 net orders for March were down 9% to 40,800 units, compared with February numbers.

While significantly more trucks are needed to handle the freight growth generated by the economic recovery and government stimulus, truck production continues to be substantially limited by shortages of semiconductors and various other components, FTR reports.

One such shortage is that of microchips, which has hobbled North American truck production over the past few weeks, Kenworth General Manager Kevin Baney told industry journalists during an April 1 press event in Phoenix, Arizona.

“This chip shortage is primarily centered in Taiwan, where the bulk of microchips are manufactured, as a result of the pandemic,” Baney said. “However, it was water damage at shipping facilities in Austin, Texas, coming in through Mexico, which ruined entire shipments of chips already shipped to the U.S. from overseas that created the short-term supply issue we’re facing now.”

There are no clear indications of when the supply-chain issues will be resolved, FTR officials said in a press release. For the next few months, computer chips will be in short supply and ports will be backed up, FTR’s Don Ake, vice president of commercial vehicles, predicts.

March was the sixth consecutive month exceeding the 40,000-unit threshold, a record. Class 8 orders now total 372,000 units for the past 12 months.

“There is tremendous pent-up demand being generated due to the constrictions on supply. The pressure in the market is building, as orders continue to flow into OEMs at a record pace. To have this level of orders roll in for half a year is impressive and unprecedented,” Don Ake, vice president of commercial vehicles for FTR, said in a press release.

Ake added: “It appears the industry will be playing catch-up well into the first half of next year,” Ake said.