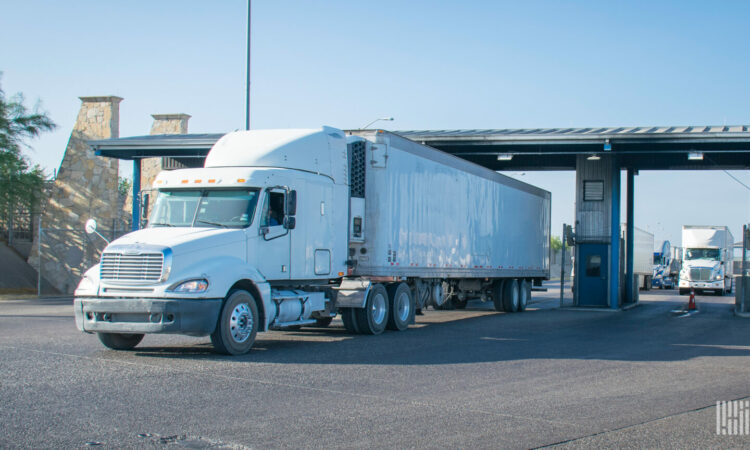 Jessie Maldonado’s family’s trucking company has been in business for around 30 years in Nuevo Laredo, Mexico.

The cross-border firm also has operations across several other Mexican cities, as well as a location in Laredo, Texas.

“It took my family’s business years to get to 500 trucks, open offices in Mexico and the United States,” Maldonado said. “About five, six years ago, you started seeing these companies around Laredo start with one truck, then a year later they have 100, 200 trucks. How did they grow so fast, we wondered?”

Maldonado, whose name has been changed for this story, spoke to FreightWaves on condition of anonymity out of fear of retribution.

“I asked some of these transportation companies, ’How can you grow so fast?’ They tell me they use B-1 visa drivers but don’t pay taxes with the drivers,” Maldonado said. “They pay their B-1 drivers in cash or checks with the B-1 driver’s name. In reality, neither the company or the B-1 driver are paying taxes on that income.”

As FreightWaves reported in March, trucking and transportation operations in the U.S. and Mexico have been violating cabotage rules by misusing foreign B-1 visa drivers to deliver loads within the U.S.

Cabotage rules prevent foreign nationals in the U.S. on B-1 business-visitor visas from competing with U.S. truckers on loads moving point to point in the U.S. The regulations are meant to protect driver jobs in the U.S. trucking industry.

Jonathan Todd, a partner at Cleveland-based law firm Benesch, said over the past year or so the firms has seen an increase in transportation companies coming to them with questions about cabotage.

“Oftentimes, it’s from the north side of the U.S. border, I see fewer issues for the southern border traffic,” Todd said. “It is often from the perspective of a Canadian operator who is looking to understand how they can lawfully structure lanes for traffic into the United States.”

Todd is part of Benesch’s transportation and logistics practice group. In February, he co-authored a cabotage primer, explaining the regulations and who enforces them.

Cabotage regulations are “intended to protect the revenues of the United States, and from a protectionist perspective, protect U.S. workers. It’s not unique in that sense, Canada has almost identical rules,” Todd said.

“On the customs side, cabotage regulations are intended to ensure that when goods are coming into the United States, they are lawfully entered into the U.S., and if duties are owed, those duties are paid,” he added. “On the immigration side, the objective is to ensure that domestic U.S. traffic is performed by U.S. trucking companies, with U.S. equipment and U.S. drivers.”

Todd said the firm sometimes hears from clients who feel that some competitors may not be following cabotage regulations, giving those companies an unfair advantage.

“We’ll hear, ’My competitors are making this run this way’ or ‘I’ve always thought that I couldn’t do this,’ There are lots of lots of misunderstandings that we kind of have to run to ground with folks,” Todd said.

Rick Hepp, who also works at the Benesch law firm, said many transportation operators ask questions “on the front end to make sure that whatever is going to be done is legal and is authorized.”

Hepp focuses on labor and employment issues for Benesch.

“We get questions about whether foreign drivers are permitted to enter the U.S. to deliver goods and then what they’re permitted to do once they’re in the country,” Hepp said. “From time to time, Border Patrol agents interpret regulations differently than employers do. We’re called to help to try to get everybody into compliance.”

Todd and Hepp said cabotage regulations can be confusing because they fall under the jurisdiction of both U.S. Customs and Border Protection (CBP) and U.S. Citizenship and Immigration Services (ICE).

“If you have someone who is permitted to come into the United States to work, the real point of risk is what a person does while they’re in the United States,” Todd said. “If that person is running loads from Laredo to Los Angeles and back, for example, with U.S. equipment that’s registered and plated in the U.S., moving goods within the U.S., then from a customs perspective there is less of an issue. These are domestic goods. This is a domestic movement.”

The first possible enforcement of cabotage regulations for B-1 visa truck drivers should be when they initially cross the border and meet a CBP agent.

“That would be where you would present the reasons for your coming over; that would be when they would do the questions — the reason for a visit and where a load is going to be delivered — those types of questions,” Hepp said.

Hepp also said the practice of employing immigrants illegally is more of a general immigration problem, rather than a CBP enforcement issue.

From an immigration perspective, the lawfulness of employing B-1 visa drivers to deliver loads in the U.S. “would be a matter of ICE enforcing regulations within the United States,” Hepp said. “You’re not supposed to employ individuals who are not authorized to work in the United States.”

Trucking industry professionals said the misuse of B-1 visa drivers represents a significant savings to U.S. carriers that set up outsourced B-1 driver fleets at a lower cost.

“It hurts the U.S. truck drivers most of all, because it reduces the overall wages in the industry,” said Mark Rump, a  truck driver who has been in the industry about 30 years. “It’s hard for me to go get a raise when a company can have people come up, a driver on a visa from Mexico, they get like 15 cents a mile and no benefits.”

“Companies … have houses rented in Columbus, Ohio, and Minneapolis, Minnesota, and they recruit in Somalia, bringing over people on work visas. They pay to bring these drivers over and they all share a house to get an address,” Rump said. “This is a big problem but has been happening for many years. These places ’contribute’ to political campaigns so it is difficult to stop.”

General cargo truck drivers in Mexico earn about $7.19 an hour or about $1,148 a month, according to the Mexican Social Security Institute. B-1 drivers hauling loads in the U.S. are often paid more than most domestic tractor-trailer operators in Mexico.

A trucking company owner in Monterrey, Mexico, alleges U.S. companies are paying drivers with B-1 visas three to four times more than what they could earn in Mexico.

Cabotage violations have been ongoing for years

While it is difficult to precisely quantify how many carriers are involved in the practice of irregularly employing drivers with B-1 visas, a 2019 study commissioned by the Teamsters alleges the practice became widespread in Nuevo Laredo around about 15 years ago.

“The first large B-1 fleets began to appear in Nuevo Laredo in the mid 2000s, and the number of B-1 fleets and outsourcing set-ups has grown since,” according to the Teamsters report by Empower LLC, a Mexico City-based research firm.

“Empower LLC has not obtained reliable data about the total size of the labor market for B-1 operators, but there are several open and closed Facebook groups that serve as job forums for B-1 drivers, with thousands of members each. The most active of these has over 11,000 members and is almost exclusively frequented by employers and drivers based in Nuevo Laredo and Laredo,” according to the report.

While the Teamsters study from Empower LLC focused on Laredo and Nuevo Laredo, the practice of misusing B-1 visa truck drivers has been alleged in many other cities along both the Mexican and Canadian borders.

A longtime truck driver who currently works in the oil and gas industry told FreightWaves the misuse of B-1 visa drivers is also widespread in the Permian Basin in West Texas.

“Currently there is a company leased on to the same company that I’m working for that employs B-1s,” the oilfield driver said. “These drivers come across and stay up to six months here without returning to Mexico. This has been an ongoing problem for at least the last five years or maybe longer.”

The oilfield driver said he is originally from Eagle Pass, Texas, where there are also several companies misusing Mexican B-1 visa drivers.

“Myself and other owner-operator truck drivers in Eagle Pass are always having a hard time finding decent-paying jobs/loads, because the Mexican carriers underbid us all the time,” the oilfield driver said.

“It hurts safety because a driver here on a visa for a company might be less likely to report safety problems at that company,” Rump said. “Not that the drivers are trying to be unsafe, but I think they’d be more fearful to complain to the company about some problems. Really, we don’t know if they’re trained properly either.”

Rump said there should be no tolerance for companies that violate cabotage regulations.

“If the truck is hauling freight illegally in interstate commerce, that should be a federal seizure of that equipment immediately, and drivers that are operating here illegally should be deported,” Rump said.

Todd said his practice does not have any indication that cabotage enforcement “is greater on one border than the other.”

Maldonado said he knows one company in Laredo with a fleet of 400 trucks that allegedly employs 600 drivers with B-1 visas who are paid cash without withholding taxes.

U.S. companies paying a B-1 driver should withhold 30% of taxes until the B-1 driver pays any U.S. taxes they might be subject to. According to Maldonado, trucking companies in Laredo are using [IRS] form W-8 (similar to a 1099 form) to claim exempt status from certain tax withholdings on B-1 visa drivers.

Maldonado said companies that are misusing B-1 drivers are hurting firms like his that comply with the law and cabotage regulations.

“It’s unethical practice to evade taxes; it hurts a lot of companies and affects them long term,” Maldonado said. “These companies aren’t paying payroll taxes, the driver doesn’t pay taxes, it’s a win-win for them. We started to realize that that’s why they were growing so much. They are able to keep their prices on freight very low, sell very cheap freight, because they are not paying taxes.”

Maldonado said the effect of B-1 visa drivers might have been among the factors in the bankruptcy of Celadon in December 2019 and the closure of the Rich Logistics terminal in Laredo in September 2019.

Rump said cabotage violations undercut what could otherwise be “a good living” for many truckers.

“A good driver that is willing to be gone on the road could make $100,000 a year in two years,” Rump said. “I think it could serve people for their whole life.”