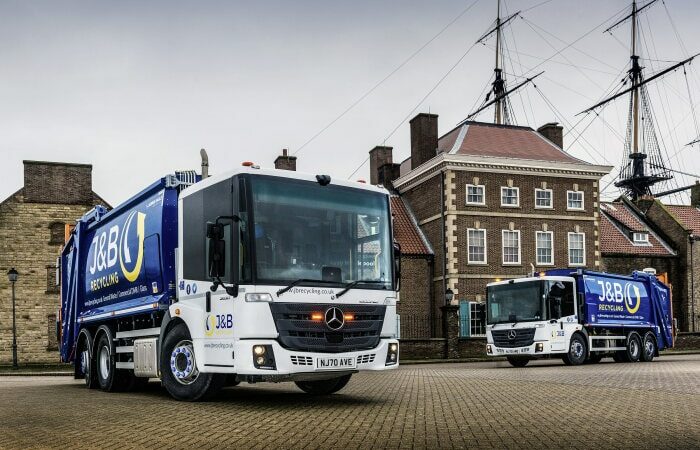 Stuttgart/Hartlepool (GB). J&B Recycling is a waste disposal firm which employs a staff of more than 200 and is based in Hartlepool, north-east England. The company puts its trust in the reliability, efficiency and safety technologies from Mercedes-Benz Trucks. After already commissioning three of the first low-entry Econic vehicles to be equipped as standard with Active Brake Assist 5, the company has now ordered a further two 26-tonne Econic 2630 LS models. Operations Manager Matt Tyrie explains: “Our fleet regeneration programme is designed to keep interruptions at bay which would otherwise impact the service we offer our customers. It also protects our company against the risk of rising costs. So I’m firmly of the belief that our investments in Mercedes-Benz vehicles won’t just strengthen our market position but will also offer greater safety during daily operations in rush-hour traffic.”

The Mercedes-Benz Econic 2630 LS vehicles with waste compactor body are equipped with a steering rear axle which increases manoeuvrability by drastically reducing the turning circle. Their 7.7-litre OM 936 six-cylinder inline engines deliver 220 kW (299 hp) and are connected to a six-speed automatic transmission. In addition to this, the vehicles are also equipped with the latest safety assistance technologies. Among the technologies on-board is the standard Active Brake Assist 5 (ABA 5).

ABA 5 can detect vehicles travelling in front as well as stationary obstacles within its own lane at speeds up to 90 km/h. If a dangerous situation arises, a three-stage reaction is initiated: first the system warns the driver using visual and audible signals. If the driver fails to react to this, a partial application of the brakes is carried out (approx. 50 %). In the event of the driver still failing to react, stage 3 is initiated: ABA 5 carries out a full brake application in order to bring the truck to a standstill. In doing so, the hazard warning lights are activated to warn traffic behind.

Further optional safety features which J&B Recycling have ordered for their Econic 2630 LS models include, among other things, a camera system comprising a monitor, two cameras on the outside mirrors and additional forward and rear-facing cameras. The forward-facing camera also covers the blind spot (retrofit solution).

The five Mercedes-Benz Econic trucks are part of J&B Recycling’s fleet of 21 vehicles. Each year, the fleet collects more than 200,000 tonnes of waste from commercial and private premises. The company is based in the port town of Hartlepool in north-east England, which is also home to the oldest frigate still afloat in Great Britain, HMS Trincomalee.