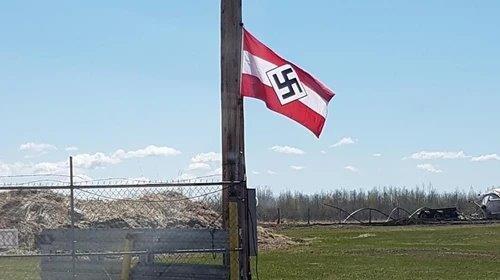 Two Hitler Youth flags were spotted flying on separate rural Alberta properties last week. One man has since removed the Hitler Youth symbol, while the other is letting his fly next to a Confederate flag.

The Friends of Simon Wiesenthal Center for Holocaust Studies, a Jewish organization based in Toronto, filed a criminal complaint with the RCMP Sunday after being notified of Hitler Youth and Confederate flags displayed side by side, high in the air at a property near Breton, southwest of Edmonton.

“It’s very disturbing for us. The swastika is the ultimate symbol of hatred, and for our community symbolizes terror and genocide,” the group’s policy director Jaime Kirzner-Roberts told VICE World News on Wednesday.

According to police, the owner of the Hitler Youth and Confederate flags has not taken his flags down.Photo courtesy of Friends of Simon Wiesenthal Center for Holocaust Studies

“These flags are disturbing, inappropriate, and do not represent the values of the people of Brazeau County,” he wrote. “We call upon the landowner to remove them immediately.”

The red-and-white-striped flag with a swastika in the middle was the symbol of Hitler Youth, basically a racist, militant Boy Scouts with forced enrolment for boys ages 14-18 in 1930s Nazi Germany.

The flag was flown at another Alberta property near Boyle, about two hours northeast of Edmonton, last week. RCMP said the man local media identified as John Zwierkowski took it down voluntarily after talking to police. Locals told the Athabasca Advocate that Zwierkowski, who uses the property to run a mechanical and trucking business, previously flew a Trump 2020 flag in the same spot.

While the flags were on private property in both cases, they were all highly visible to the public.

McNallie travelled to the northern Alberta town of Grimshaw in January to stage a protest after photos circulated of a man wearing a Ku Klux Klan hood outside the local post office.

McNallie said she is no longer shocked or surprised to see such brazen displays of racist symbols in Alberta.

Kelly said there is no indication the two incidents are connected in any way.

RCMP are investigating both cases to determine whether the actions are criminal in nature, but would not give more details Wednesday.

“It’s definitely a hate crime. It’s very harmful and traumatic for many racialized people,” she said. “It’s got to be looked into, it’s got to be dealt with in some way.”

McNallie is urging community members to learn about the area’s rich Black history–the town of Breton, previously known as Keystone, was founded by Black settlers from the southern U.S. in 1909.