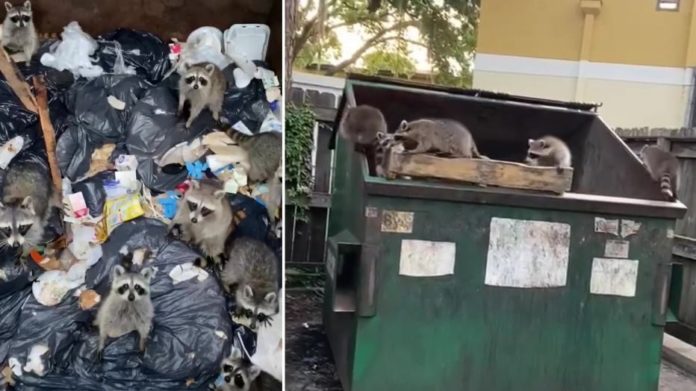 A truck driver helped a family of raccoons trapped inside of a dumpster in Florida late last week.

Truck driver Robert Acton says that he was making a stop on his usual delivery route on Friday, May 14th when he heard a loud noise coming from a dumpster outside of the business, so he walked over to investigate.

Acton says that he saw a large group of raccoons inside of the dumpster, one mama and many babies, and it appeared that they got it, but now could not get out.

“Their momma taught them to get in the trash and they shouldn’t have,” Acton said to Fox 13 News.

Acton said he quickly found an old pallet on his truck and lowered it into the dumpster, creating a makeshift ladder for the raccoons.

“There must’ve been 20 of them, and they got in but couldn’t get out,” Acton said, pointing out that this isn’t the first time he has come to the aid of a family of raccoons. He says that just last week, he did a similar thing to help out another stuck group inside of another dumpster.

“We should always be kind to Mother Nature, so I’m going to help these little guys,” he said.  “I’d hate to think of a compactor coming and throwing them in the back. That wouldn’t be good.”