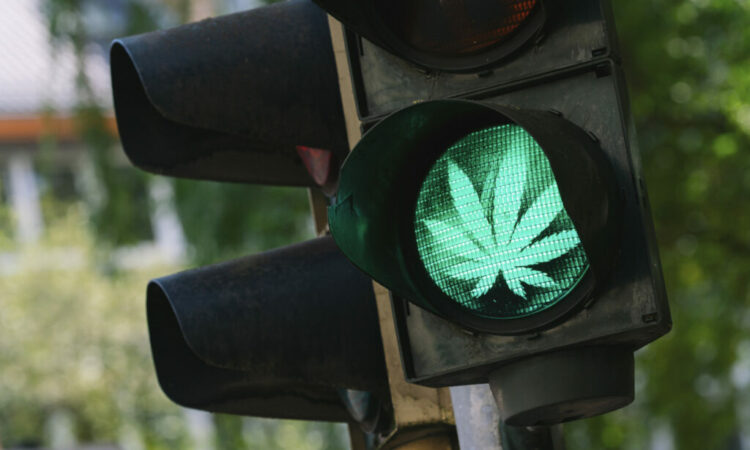 While a substantial portion of the population was overjoyed when Canada legalized recreational cannabis in October 2018, it’s become a nightmare for truck fleets, drivers and law enforcement. Removing marijuana from the list of illegal drugs like cocaine, heroin and amphetamines — and putting it in the same category as beer, liquor and wine — created a moral dilemma as well as safety enforcement problem.

In Canada, we can’t prohibit people from engaging in legal activities, even if they might pose a safety risk. Americans may have similar qualms, but they seem to worry less about human rights than public safety. Down south, marijuana remains a banned substance from a federal perspective even though 19 states have legalized the sale and consumption of marijuana and its derivatives.

Since trucking is federally regulated in the U.S., cannabis remains a prohibited substance under federal workplace drug testing programs. Canadian carriers operating in that country must comply with those rules, which include random, reasonable-cause, and post-incident testing.

For Canadian drivers operating in the U.S. DOT environment, consuming cannabis is ill-advised. While it’s not illegal under Canadian laws, failing to pass a random drug screen can be a career-limiting move.

There are those that argue there’s a big difference between having consumed cannabis and being impaired. However, we have drawn lines in the sand regarding safety-sensitive activities — like driving — while under the drug’s influence, because it can substantially impair psychomotor skills and cognitive function.

But there’s a catch: the testing we do for substances like THC is not intended to reflect a level of impairment. It just shows the individual recently consumed the drug. Tetrahydrocannabinol (THC) — the main psychoactive constituent in cannabis — takes a long time to leave the body. THC is fat-soluble rather than water-soluble. Water-soluble substances like alcohol or cocaine leave the body fairly soon after consumption. THC can remain stored in fat cells of the brain for extended periods.

According to Barb Butler, one of Canada’s leading authorities on workplace alcohol and drug testing policies, the impact of THC varies from one person to the next based on weight, size, and experience with cannabis. She says as long as there are even just traces of THC in the system, the person could still test positive.

“We can’t say how impaired they are because we don’t know how much they used, how recently they used, how it was consumed [smoking, vaping, edibles etc.], or the potency of the drug they consumed,” she says. “In fact, the cutoff point for cannabis — 2 nanograms of THC per milliliter of blood — makes no attempt to define impairment. It just confirms recent use.”

The problem for commercial drivers not covered by U.S. DOT drug testing is that responsibly participating in a legal activity on their own time can still have consequences in the workplace. If a company has a non-U.S. DOT drug testing program that allows for random, reasonable-cause, and/or post-incident testing, drivers who show up for work Monday morning might not pass a random test because of what they did at home Saturday night.

“Substantial improvement in the accuracy of current biochemical measures to detect cannabis impairment is needed to both ensure public safety and protect the rights of legal cannabis users,” writes Sarah B. Windle, the lead author of Impaired Driving and Legalization of Recreational Cannabis, published earlier this year in the Canadian Medical Association Journal.

What the tests reveal

Blood alcohol tests are an accepted proxy for levels of impairment. Canada has decided that 80 milligrams of alcohol in 100 milliliters of blood — or a 0.08% blood alcohol content (BAC) — is the level at which Criminal Code impaired driving charges can be laid. Expressing the limit as a percentage helps account for the differences between someone who weighs 250 pounds and another who weighs 125 pounds.

But there’s no assumption about degrees of impairment. It’s simply against the law to operate a motor vehicle while having a BAC higher than 0.08% — or whatever the jurisdictional standard is. The threshold is lower for commercial drivers in most jurisdictions, with many having adopted a zero-BAC policy.

Similarly, the Canada Criminal Code prescribes the legal blood drug concentration limit for cannabis as 2 nanograms of THC per milliliter of blood. Like the BAC standard, this one does not speak to impairment, only the presence of THC in the blood.

Typically, roadside THC screening tests are done with a device that measures THC content in a saliva sample. “They use a cutoff of 25 ng/mL for screening purposes,” says Dr. Melissa Snider-Adler, chief medical review officer at DriverCheck. “If the screen is positive, then the person is brought in and blood testing is done, or an evaluation by a drug recognition expert, or both.”

There are no “guidelines” or rules of thumb that apply to THC in the way we talk about “acceptable” alcohol consumption. For example, the Mothers Against Drunk Driving (MADD Canada) website notes, “For the vast majority of people, drinking socially – having a glass of wine or two with dinner or a beer or two after work – will not put them above the .05% level.” (Even that can put a commercial driver over the limit where lower thresholds apply.)

You will not find similar guidance that says, for example, one THC gummy or cookie during a specific period is okay.

The other question that arises is the time between consumption and testing. There’s no conclusive guidance because of variables including the quantity consumed, how it was consumed, the drug’s potency, and the individual’s use habits. Snider-Adler says various testing methods will reveal the presence of THC in saliva and/or blood sample over various lengths of time.

Snider-Adler says some guidance is available from the Occupational and Environmental Medical Association of Canada (OEMAC) on “safe” intervals between consumption and testing.

“Their recommendation is that individuals do not use cannabis for at least 24 hours prior to engaging in any safety-sensitive duties, which would be truck driving,” she says. “That does not mean that after 24 hours there is no risk of impairment. There are studies of chronic, heavy, daily users of cannabis, that show impairment, not necessarily feeling high, can last far beyond 24 hours.”

Even with a 24-hour interval, it may simply be too risky for a commercial driver to risk the chance of getting caught with a blood THC level of 2 ng/mL or higher.

If a Canadian truck driver operates in the U.S. and is subject to U.S. DOT drug and alcohol testing requirements, the consequences of testing are black and white.

“If you have a positive test, you no longer have clearance to drive in the U.S.,” says Snider-Adler. “It’s a violation that’s reported in the Drug and Alcohol Clearinghouse [database], and there are specific procedures on how to proceed with regaining clearance to drive in that country. From the Canadian perspective, where the company does not operate in the U.S., what guides the employee is the company policy.”

For non-DOT Canadian carriers, drug and alcohol testing is optional in Canadian workplaces. But any programs that exist must be based on an established policy that employees understand. Those policies are supposed to clearly state what workers are allowed and not allowed to do, the conditions and circumstances for testing – such as random, reasonable-cause, and post-incident testing — and the terms of any assistance or support plans.

Contrary to popular belief, random drug testing is not illegal in Canada.

“When you look at the law and the decisions that have been made that guide testing in Canada, when considering doing random testing higher standards will have to be met,” says Snider-Adler. “People will often say random testing is illegal, but that’s absolutely not true.”

Failing a drug test may or may not result in termination. It depends of the terms and conditions of the company’s policy.

“Sometimes it depends on the type of work,” says Snider-Adler. “As to whether or not employees are terminated for using cannabis, I don’t want to say it doesn’t happen, nor do I want to say it always happens. It’s very much dependent on the policies and expectations of that particular company.”

Butler says there are no federal or provincial regulations that speak to drug testing in the workplace.

“It’s up to us to learn from the various rulings as to where we go,” she says.

And, of course, police may get involved in post-incident testing if they suspect impairment could be a factor, just like testing for blood alcohol levels after a crash.

Oral fluid testing is used as a screening tool at roadside before a blood test is administered. It’s also widely used in Canada by non-DOT regulated companies. Efforts are underway in the U.S. to get oral fluid testing approved for use in DOT testing programs, but it’s not there yet.

Presently U.S. carriers have the option of using oral fluid testing in addition to urine testing, but DOT still requires a urine test for compliance.

Snider-Adler says there are a lot of advantages to oral fluid testing compared to urine tests. It’s almost impossible to tamper with the test, the test can be observed, it eliminates “shy-bladder syndrome” where the subject can’t provide a sample, and you don’t need a bathroom.

“It’s a swab, you put in the mouth while the person stands right in front of you,” she says.

In most cases, it detects THC use over about 24 hours rather than the several weeks identified by a urine test.

A lot of companies like that because they may not focus on what employees do on their own time, as long as it doesn’t impact safety in the workplace. “They’ll use an oral fluid test because they believe the highest risk is within the first 24 hours,” says Snider-Adler.

Butler says we could see oral fluid testing as an option in the U.S. by the end of this year.

How about CBD oil?

Claims have been made about the alleged benefits of CBD oil (cannabidiol) for treating chronic pain, anxiety and depression, migraine headaches, and even Parkinson’s disease and Alzheimer’s disease. While conventional drugs can help relieve many symptoms, some people see CBD as a more natural alternative.

CBD can contain small quantities of THC, usually less than 0.3%, but since it’s not regulated, some brands may contain higher doses. While CBD is not is not psychoactive, the trace amounts of THC can still show up in a drug test.

“I see a number of individuals from the U.S. DOT perspective who have tried CBD oil for pain relief not thinking that it would be an issue,” says Snider-Adler. “CBD oil often contains a little bit of THC and they will test positive. In the eyes of the U.S. DOT, that’s a violation. If there’s any THC in your system. That’s the problem.”

Snider-Adler advises U.S. DOT drivers to simply avoid anything containing TNC. “Absolutely no cannabis, no CBD oil. No smoking cannabis, no eating anything with any cannabis, just avoid it all,” she says. “If there’s any THC, it’s going to show positive in a urine test.”