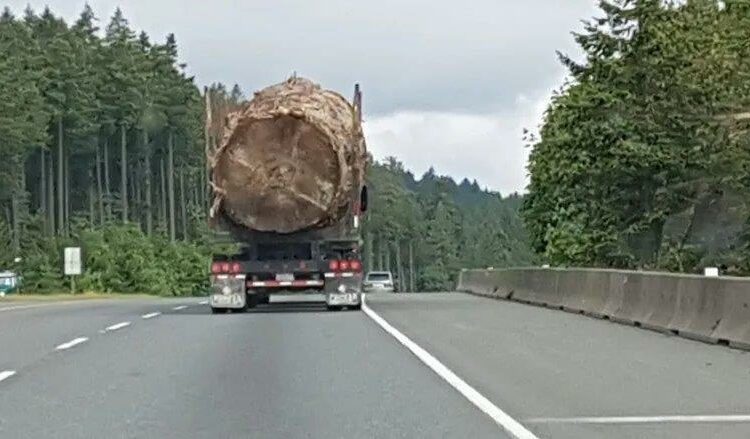 B.C. Ministry of Forests confirms tree was cut in 2020 and is being transported for processing

B.C. officials have confirmed that a massive spruce log photographed as it was hauled down a highway this week was cut on north Vancouver Island in 2020, months before new rules were introduced to protect giant trees.

A photo of the tree taken by Lorna Beecroft of Nanaimo on Tuesday made its way around the world on social media. As of Thursday, it had been shared more than 15,000 times on Twitter and 18,000 times on Facebook. She received  messages decrying the loss of old-growth trees from as far away as Japan, Denmark and Germany.

In an emailed response to CBC News, a spokesperson for the Ministry of Forests said the tree was cut between March and mid-August of last year and then transported by Western Forest Products “a month before the Special Tree Protection Regulation came into effect on Sept. 11, of 2020.”

“Government brought in this regulation to protect exceptionally large trees of all species throughout the province, and today, a tree of this size might well be illegal to harvest under the regulation, and fines of up to $100,000 could be imposed if it was,” the email says.

On Friday evening, Western Forest Products issued a statement over Twitter saying it did not harvest or transport the log and will be sharing a report on the matter with the province.

Beecroft says she snapped the photo because she was stunned to see a tree that large cut down, particularly in light of ongoing protests against old-growth logging taking place not far away on southern Vancouver Island.

“It was actually rather mind-boggling … it was so incongruous,” said Beecroft. “I have never seen a tree that big on a truck. It could be 1,000 years old.”

The photo touched a nerve globally during a week in which more than 127 people were arrested trying to protect ancient trees near the Fairy Creek watershed.

Demonstrators have massed near Port Renfrew to try to stop Teal-Jones logging operations. The RCMP have moved in to enforce a court injunction and remove protesters who impede legal logging in the area.

Beecroft says she’s no “hippie nut,” as she’s been labelled by some people online. She used to work in the logging industry in the B.C. Interior and says she supports logging, but feels ancient giant trees need protection.

“Especially right now, with people fighting to make sure we don’t log off these old-growth trees, holy cow, this is a tree like the ones they are fighting for and it’s driving down the road right now,” said Beecroft. “It’s like watching someone shoot the last dodo. We can’t do this.”

The Ministry of Forests clarified that the log had been transported to a floating log-sorting area in the Lower Mainland for storage, was later sold and was being transported to Port Alberni for processing when it was observed on the highway.

Because it was cut before the 2020 regulations came into effect, there is no contravention of the Special Tree Protection Regulation, the ministry’s email added.

John Kendall, a registered professional forester with Khowutzun Freegro TreeShelters, says the lumber alone that could be produced from the tree is valuable, but there’s more to it than that.

It turns out that the massive log will be milled in Port Alberni and turned into guitar parts at Acoustic Woods Ltd., a small, family-owned sawmill that produces musical instrument parts.

Ed Dicks of Acoustic Woods said the log will create about 3,000 guitar soundboards.

“We don’t even like those logs,” Dicks said. “They’re too big for us to handle. But when we buy the logs, we don’t necessarily get to see and choose what we’re buying.”

When she learned what the majestic log was destined for, Beecroft said she was pleased that at least it will be used to make something “really wonderful.”