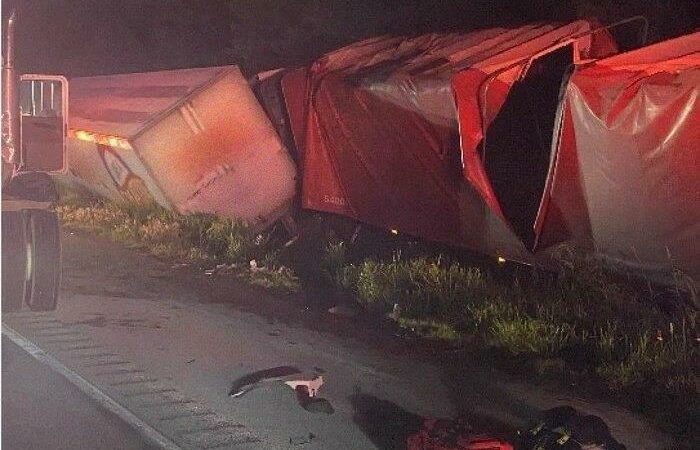 A 37-year-old Texas truck driver is dead following a three-truck collision on eastbound Interstate 70 in Indiana.

A statement from the Indiana State Police says Alfred Hill Jr. of Houston died after being struck near mile marker 52 just after. midnight this morning, June 10. Hill is said to have been outside his disabled truck when it and he were struck by another tractor-trailer.

ISP says Hill was outside of his 2001 Mack placing out emergency triangles due to his vehicle having become disabled. They say the truck was partially in the driving lane with no lighting.

Amer Al Fatlawi, 39, of Lincoln, Nebraska, was traveling eastbound in his 1996 Freightliner at the time. At the last second Al Fatlawi saw Hill’s truck and attempted to swerve into the passing lane to avoid a collision. According to ISP, a 2021 Volvo tractor-trailer driven by Christopher M. Lyles, 39, of Griffin, Georgia, was traveling in the passing lane and was unable to avoid a collision with Al Fatlawi’s Freightliner.  The collision forced both tractor-trailers to the south side of the highway, striking Hill and his disabled semi.

Al Fatlawi was airlifted to Methodist Hospital, with non-life-threatening injuries. Lyles sustained no injuries in the collision.

The collision occurred in Morgan County, which is just southwest of Indianapolis.