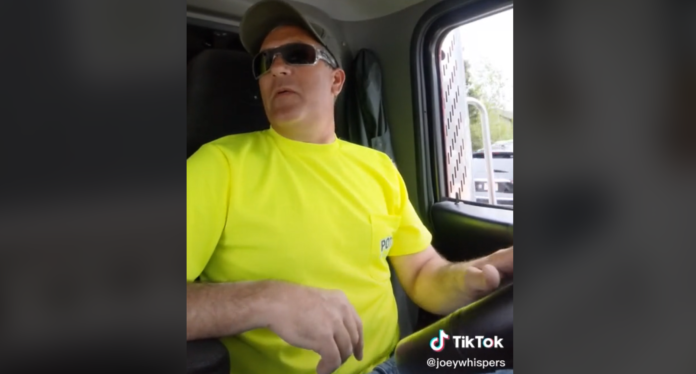 A trucker tells the full, honest truth about laying on the horn for eager kids in this quick video.

In the clip, a driver heading to one of his regular deliveries explains that, every time he makes a delivery on this street, the parents bring their little boys out to wave at his rig and it makes him feel some type of way.

“I really hope they’re outside today,” he confesses. “We’ll see on my way back out.”

After reversing down the street for his delivery, the trucker pulls forward back up the street where he sees the family standing outside waiting for him, just like he had hoped.

“They’re outside, there they are!” he exclaims before pulling on the horn.

“You guys have a good day! Love that shit. Man, nothing better than that!” he giggles to himself.

One hour later, the driver makes another trip up and down the street and the family is back standing outside, so he takes the opportunity to let him know how their excitement over his rig really makes him feel.

“Just so you know, I live for this stuff!” he shouts from the cab. The father smiles and waves as the trucker pulls on the horn one last time and drives away.

It’s true – nothing better than putting a smile on a little kid’s face just doing what you love.